Friend of the Court Not Very Friendly 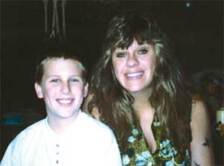 Nancy Fox and her son Casey tried unsuccessfully for 10 years to collect child support through Michigan’s Friend of the Court. She finally hired a private company, and the Friend of the Court demanded a “cut” of the private firm’s success.

Michigan’s next Attorney General Mike Cox says the reason he wants to pursue “deadbeat” parents and get them to pay their overdue child support is because he wants to help the kids. A great way to do that would be to make it easier for custodial parents to fire Michigan’s “Friend of the Court,” the state’s official child support collection agency, and hire a private attorney or collection agency to do the same job.

If you’re a custodial parent whose deadbeat ex-spouse owes child support, be careful: Once a relationship with the Friend of the Court has been established, custodial parents cannot choose to end it. Indeed, it is easier to get a divorce than to close a case with the FOC. Try to hire someone in the private sector to collect, and you’ll discover what many parents already have: Michigan is among the few states that make this option difficult if not impossible.

A lawyer or collection agency can obtain records or files only through the parent: The FOC refuses officially to deal with anyone else. This includes payment: Any delinquent child support money collected — to be recognized legally - must come to the FOC first, which pays the parent after taking its cut. In other words, having failed the custodial parent, the FOC takes its pay anyway, leaving the parent to pay the private collector — which did the real work - from his or her own cut.

FOC spokeswoman Marcia McBrien does not defend the fairness of this practice, but says FOC’s policy is based on its “interpretation of state law.”

If the FOC had a sterling record with regard to collections, this arrangement would still reduce parents’ choices with regard to what is best for their children, and create additional work for already burdened single parents. And it presumes that government officials know what is best for parents and children using the FOC. But the FOC is commonly delinquent in collecting delinquent child support.

Washtenaw County resident Nancy Fox is a case in point. Her ex-husband left Michigan one year after a 1990 court order mandated his level of child support, and stopped making payments. Twice a year for 10 years, Fox traveled to Ann Arbor’s FOC office and filled out its many forms in the hope that officials would find her ex-husband, collect what was owed her, and ensure that future support payments would be forthcoming. Nothing worked until she turned to Supportkids, a private, for-profit collection agency based in Austin, Texas.

Fox signed an agreement with Supportkids, promising the collector 34 percent of the money collected under her contract. She figured that, “getting most of what I was owed was better than getting 100 percent of nothing.” It took Supportkids just two months to obtain the decade of missing payments from her ex-husband. The collection agency also made arrangements for his quarterly payments to resume immediately.

The story does not end there. As per official policy, when the same FOC office that failed to collect for Nancy Fox for a decade got wind of the private agency’s success, it mandated that Supportkids route the ex-husband’s payment through the FOC, at which time it would take its “processing fee.” In other words, having been bested by its private rival, the FOC demanded a piece of the financial pie anyway. Even worse, the agency took its cut from a single mother who already had given up a third of what was originally owed her.

According to a March 2002 report by the U.S. General Accounting Office, state and local governments elsewhere have been turning to private collection agencies to help address growing caseloads. The report states that, of the parents who hire private enforcement agencies, 64 percent do so because state agencies fail to collect for them. Another 28 percent cite frustration with the “customer service” aspect of their government collection agency. Nationwide, child support in arrears through August 2001 amounts to $89 billion, $5.5 billion of which is owed to Michigan parents, mostly moms, and children.

Attorney General Cox and the Michigan’s Legislature should put their heads together and make it easier for parents to divorce themselves from the FOC and seek superior private alternatives. A government bureaucracy may lose a little turf, but it’s what would be best for Michigan’s children.