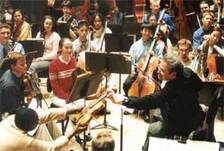 Among its other works, the Detroit Symphony Orchestra also runs a civic orchestra, comprised of local youth. The civic orchestra is a pre-professional training orchestra. In this photo, world-renowned musician Itzhak Perlman conducts a “master” rehearsal.

The Michigan Department of History, Arts, and Libraries is one of the most recent additions to state government, having been created under Public Act 63 of 2001. It consolidates the administration of a number of pre-existing state functions and programs.

It is at least debatable whether citizens allowed to keep their own "arts dollars" would choose to spend it in such ways; but even if they did, as least it would be their own money and their own choice.

Before proceeding into an analysis of what MCACA is and why it is a harmful component of state government, the reader may find it useful to review the following brief explanation of the philosophy undergirding such a recommendation.

American traditions of law and liberty recognize a fundamental distinction between the activities of government and those of society at large. Since the colonial era, the coercive institutions of government have been widely understood to be appropriate to the protection of life and property from criminal violence and fraud.

Other concerns, however basic or vital, historically have been addressed by voluntary civil institutions. This theoretical understanding of, and practical distinction between, the different roles of state and society — spelled out in the federal and state constitutions — have been key to unleashing the vibrant cultural and economic life that has flourished in this country since its inception in the 18th century. In other words, America’s Founders understood that while government may serve, in some ways, as the protector of a society’s culture, it is but a product, not the source, of that culture.

Within a free, or civil, society, government is just one of many threads in the broad and colorful tapestry of human life. It has the narrow and limited role of guardian, and when it steps outside of that role, its growth into other spheres of life soon results in an increasingly unfree, or political, society. The difference for the average citizen is this: In a civil society, citizens make the decisions affecting their lives for themselves. In a political society, government officials make many or even most of those decisions for citizens. The citizen’s judgment about what is in his or her own best interest is supplanted by the judgment of others, who may not have the citizen’s best interests at heart - or even know what those best interests are.

The types of decisions made by bureaucrats in a political society run from the most vital — such as where one should (or is allowed) to live, how one’s children are to be educated, or how one is to spend one’s own money.

But perhaps the most dangerous aspect of a political society is when the state sets itself up as the very definer of a society’s culture rather than its simple guardian. In such a situation, there comes to be an “official line” on everything. This official line, instead of being reached by open academic inquiry and consensus, is instead asserted and enforced by a bureaucratic minority operating coercive machinery of the state.

Instead of being open to challenge and revision as new nuggets of truth are gleaned by scholarly prospectors, the government-enforced official line is relatively impervious to new evidence or interpretation. Thus there is the spectacle, in some countries, of a “Ministry of Culture,” that may actually criminally prosecute those who hold the “wrong,” i.e., governmentally disapproved, opinions. This country is not yet that far down the road to censorship and statism, but the persistence of the phenomenon known as “political correctness” reveals the ever-present danger that exists to intellectual and academic freedom should citizens ever cease their vigilance.

Former Gov. John Engler created the Michigan Council for Arts and Cultural Affairs (MCACA) in 1991 “to encourage, develop, and facilitate an enriched environment of artistic, creative cultural activity in Michigan.” The council is made up of 15 gubernatorial appointees, each of whom serve three-year terms, and a staff of nine individuals, who oversee the awarding of grants to a variety of organizations and projects throughout the state. The MCACA’s fiscal year 2003 appropriation is $12,481,700, with $700,000 of that amount coming from federal sources. In addition, the MCACA received an additional $11,900,000 from the state’s general fund as a result of the August 2002 cigarette tax increase, for a total budget of $24,381,700.

The Michigan Legislature should zero out state funding for the Michigan Council for Arts and Cultural Affairs. The reasons for this move include the following:.

It is at least debatable whether citizens allowed to keep their own “arts dollars” would choose to spend it in such ways; but even if they did, at least it would be their own money and their own choice. As author John Updike, two-time winner of the Pulitzer Prize, declared, “I would rather have as my patron a host of anonymous citizens digging into their own pockets for the price of a book or a magazine than a small body of enlightened and responsible men administering public funds.”

Even if government arts programs did not hurt artists in general, should programs such as the MCACA be off limits as a target of spending cuts? At the very least, there is value in having the legislature examine this program to see whether or not it should be pared back. Indeed, in times of tight budgets it is going to be important for legislators to inquire openly about the value of such programs, before raising taxes of people who may or may not have an interest in art. Is paying an artist to dress up as Cortez and bark gibberish at children more important than letting low-income people determine for themselves how much they would like to spend on the arts?

The arts are too important to be left to the whims of politics and politicians. The MCACA program should be privatized, and artists should be prepared to thrive without the heavy hand of government.

David Bardallis is an adjunct scholar with, and former managing editor for the Mackinac Center for Public Policy.