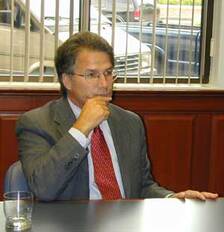 On Dec. 10, 2001, State Superintendent of Public Instruction Tom Watkins unveiled "Education YES! A Yardstick for Excellent Schools," a plan designed to keep Michigan public schools accountable for the quality of education they deliver.

The plan comes months after Watkins and the State Board of Education abandoned a previous accountability model drafted by former State Superintendent of Public Instruction Arthur Ellis.

Though it remains to be seen how the evaluation criteria for the accreditation system will be crafted, the plan features an annual letter grade for Michigan public schools, which includes charter schools. The grades will be based on a combination of student Michigan Educational Assessment Program (MEAP) test scores, staff development programs, student attendance, and level of parental involvement. The plan will go into effect beginning with the 2002-03 school year, and the first official grades will be posted after a year of evaluation.

"We're trying to hold schools accountable in a fair and reasonable way," Watkins said. "We're calling for having grades-A through E-because it's easily understandable [with] `E' representing a failing grade."

"This will be controversial," he added.

Out with the old, in with the new

Letter grades aren't the only controversial thing about the Watkins plan. Some critics are charging that the plan does not do enough to hold schools accountable and that the abandoned Ellis plan would have done a better job.

In May 2001, Watkins defended his decision to craft a new accountability plan, saying the Ellis plan unfairly designated too many schools as "unaccredited." Watkins negotiated with Ellis to withhold the list of unaccredited schools until Watkins could establish the "Education YES!" plan, which does not classify any schools as unaccredited.

Some observers note that the Watkins plan's effectiveness will be difficult to measure from one year to the next, especially when some of the plan's components include things that are hard to evaluate, such as parental involvement.

Addressing a November 2001 Michigan Association of Public School Academies conference, Lawrence Reed, president of the Mackinac Center for Public Policy, told a crowd of charter school parents, teachers, administrators, and supporters that accountability to parents is the ultimate measure of accountability in education. He challenged Watkins, who was present, to embrace reforms that would put the focus of education on children, parents, and more educational choices and encourage multiple educational options that he said could better serve a diverse population rather than a "one-size-fits-all" system.

As part of the release of the new accreditation program, the Michigan Department of Education is holding hearings around the state to introduce the program to teachers, community leaders, and citizens and to solicit feedback on how best to implement the system.