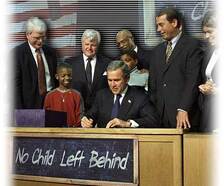 On Jan. 8, President Bush signed into law the "No Child Left Behind Act," the legislative culmination of months of debate over his education proposals.

On Jan. 8, 2002, President Bush signed into law the "No Child Left Behind Act" (H.R. 1), acting on his campaign promise to improve accountability in public schools, provide more options for students in poorly performing districts, and deliver more flexibility for states administering federal funds. The new legislation will enable individual student academic performance to be tied to federal funds for the first time in the history of U.S. public education.

Late last year, the House and Senate approved the act by votes of 393-30 and 90-7, respectively. The act includes a $48.9-billion education appropriation package, with $26.5 billion going toward elementary and secondary education for fiscal year 2002. The $26.5 billion figure is $8 billion more than last year's funding level. The balance of the appropriation is for programs outside of K-12 education.

The primary feature of the act is mandated, state-administered testing in reading and mathematics for all students in grades three through eight. Title I and other federal funding will be tied to student performance on the tests.

Each state will be required to design its own test, develop benchmarks, and create a system for measuring students' performance. The U.S. Department of Education also will develop a national test that will be used periodically to measure student progress against national academic standards. Students in schools deemed "low-performing" for three years will be able to transfer to another public school or receive funding for tutoring. Definitions for "low-performing" schools are being developed.

Under the act, parents will receive mandated school report cards describing student test score results, graduation rates, and student achievement comparisons across districts and states. Teacher performance also will be scrutinized: States must require that teachers demonstrate qualifications in the subjects they are teaching or the state must inform parents of the lack of teacher qualification in the school report cards.

The final measure of accountability under the act involves the reconstitution of failing schools. Schools that are repeatedly identified as "low-performing" will be given options of reorganizing the school's administration or changing their faculty.

Critics of the law say it undermines local control of education.

"Mostly, the bill allows the federal government to further usurp the authority of local communities to run their own schools," said David Salisbury, director of the Center for Educational Freedom at the Cato Institute in Washington, D.C. "For the past 50 years or more, we have observed a steady trend toward a situation where the federal government makes all the big decisions about education."

According to the Council for American Private Education (CAPE), the act includes funding for four federal programs intended to benefit students who attend private schools.

The act increases funding levels in nine major program areas, keeps funding the same in three, and decreases funding in two. The largest increases were in Title I (grants to local education agencies) and programs in math, science, and reading. These increases are intended to reflect President Bush's goals of making sure every child can read by third grade and demonstrate mastery of basic math and science skills in elementary school.

What the new law means for Michigan schools

But critics are skeptical that more federal involvement will improve education. Lisa Snell, director of education and child welfare for the Los Angeles-based Reason Public Policy Institute, expressed concern that the country's lowest performing urban districts will receive the most federal money yet also will be the most resistant to accountability requirements in the new law.

"Los Angeles Superintendent Roy Romer has repeatedly told reporters that districts will learn to game the system and lower standards to make sure all students meet the requirements," she wrote in a recent commentary.

"We recognized the need more than three years ago for an annual measure of our students' academic achievement at every grade level," said Coopersville superintendent Kevin O'Neill. "This information helps parents and teachers work with every student, and also helps the district measure its growth over time. We use the results to make curriculum changes and to provide professional development for our staff in areas that need improvement."

According to a recent survey, 76 percent of the state's charter public schools also administer an annual standardized exam.

"Michigan charter schools embrace accountability," said Dan Quisenberry, president of the Michigan Association of Public School Academies. "Our charter schools are prepared to meet the president's challenge of leaving no student behind through many of the measures including regular school report cards for parents and annual standardized testing."

State Department of Education officials expect to learn more about the implementation and funding details of the new law in coming months.