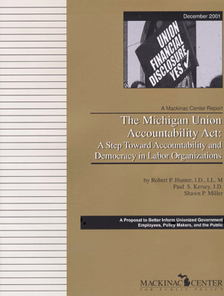 Recently released legislation, recommended by a new Mackinac Center for Public Policy study, "The Michigan Union Accountability Act, A Step Toward Accountability and Democracy in Labor Organizations," would require public-sector unions to obey the same sort of financial disclosure laws as corporations.

New legislation proposed by Rep. Robert Gosselin, R-Troy, would require public-sector unions to obey the same sort of financial disclosure laws as corporations. The legislation was originally proposed in a December 2001 report from the Mackinac Center for Public Policy.

The report, entitled "The Michigan Union Accountability Act, A Step Toward Accountability and Democracy in Labor Organizations," and authored by Robert Hunter, Paul Kersey, and Shawn Miller, analyzes current union finance laws and concludes that they are too lax, allowing vast potential for misuse of workers' dues dollars.

"There is nothing about unions or their leadership that insulates them from the same sorts of misjudgments and ethical lapses that cause us to monitor the financial dealings of business or government," said Hunter, a former member of the National Labor Relations Board and a current member of the Michigan Civil Service Commission, the four-member body that sets wages, hours, and working conditions for over 61,000 state employees.

The report cites numerous examples of misconduct by union officials, both in the private and public sector, and including examples in Michigan. "The number of abuses is staggering, and Michigan, sadly, is well represented," said Hunter. "The lack of adequate financial reporting makes unions very tempting targets for embezzlement."

"This is a critical component of union disclosure, because the Supreme Court has ruled several times that objecting workers are not obligated to pay for union political activity," explained Hunter, "but workers who support the union certainly deserve access to this information as well, so they can gauge the union's effectiveness both at the bargaining table and in the political arena. The irony is that currently the only way workers can receive even a cursory report on this is to resign from the union."

The statute proposed by Hunter, Kersey, and Miller would require government employee unions in Michigan to file annual reports similar to the LM-2 form required from unions representing private-sector workers under federal law, but with critical additions. The Michigan "Union Accountability Act" would also require a breakdown of political spending, including both direct contributions to candidates and "issue advocacy" spending. The report also suggests that reports be drawn up according to financial accounting rules typically used in business and be audited by an independent accounting firm.

Michigan Education Report contacted a spokesman for the Michigan Education Association, but at the time this article was written, the union declined to make a formal statement on the report or the pending legislation.

Hunter is optimistic that the legislation incorporating some of these features, House Bill 5574, will receive serious consideration in the House.