Proposals to Save Belle Isle Include Private/Public Partnership 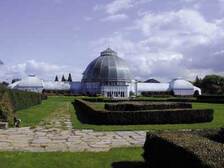 The Belle Isle Conservatory would probably fare better if Belle Isle itself were managed privately.

DETROIT-Only a year ago, Michigan Privatization Report put forward a plan for privatizing Belle Isle, the 985-acre island park situated in the Detroit River, just inside the U.S. border with Canada. Not only did we assert that, in the hands of private developers, the island park could solve its maintenance problems and become a "private-sector equivalent of Chicago's Navy Pier," we proposed that the city of Detroit exempt the businesses that would set up shop there from the welter of economically debilitating regulations that hamper the rapid growth of businesses elsewhere in the city.

While our plan was sorely criticized by the usual naysayers, the proposal may have perked the ears of one of this year's mayoral candidates, Michigan House Minority Leader Kwame Kilpatrick. During the mayoral campaign, Kilpatrick stopped short of advocating outright sale of the property, but proposed the next best thing: A conservancy along the lines of the private/public partnership that governs New York's Central Park .

The private, non-profit Central Park Conservancy manages the 843-acre park under a contract with the New York City Department of Parks and Recreation. The Conservancy's 250 staff members and 1,200 volunteers raise 85 percent of Central Park's $17 million budget and run all park operations except for police. Applied to Belle Isle, this idea would require constant fundraising, but conceivably could turn the island into something Detroit could be proud of.

Detroiters already have signaled a willingness to consider far-reaching solutions. Last summer, and again in the elections recently concluded, larger percentages than ever voted in favor of an entrance fee for Belle Isle.

But a plan for outright sale of the property would generate its own revenue. The island could be sold to a builder or group of builders for a one-time cash influx of $370 million, almost certainly a low estimate. The tourist and visitor-oriented businesses likely to spring up there would not only have an economic interest in maintaining the appearance of the area, they would definitely increase the approximately $13.8 million (at current millage rates) that would be generated in property taxes each year if the island were sold. The city also would be relieved of its $5 million-plus annual appropriation for the park.

What could be better than solving all of Belle Isle's problems, with money left over? The only thing that may be lacking now is the political will to do it. Editor's Note: For more on the privatization of Belle Isle, see "For Whom the Private Belle Tolls: Is It time to Sell Belle Isle?" in the winter 2001 edition of MPR.