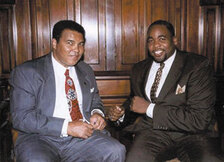 DETROIT-If the recently concluded campaign for mayor of Michigan's largest city is any measure, open-mindedness toward privatization has advanced appreciably in recent years. No candidate staked out a position ruling out privatization as a solution to problems with city services. Of course, neither did any candidate-including the winner-offer unqualified support for the idea, often adding phrases such as "as a last resort," or "only as a last step" to their endorsements.

Both Michigan House Minority Leader Kwame Kilpatrick and Detroit City Council President Gil Hill spoke favorably of allowing the private sector to handle the selling of more than 40,000 city properties, although Hill's pledge to "take the city out of the real estate business" has been the more powerful. At the same time, Kilpatrick championed the idea of turning Belle Isle into the kind of private/public conservancy that administers Central Park in New York City. City Auditor and mayoral candidate Joseph Harris favored offering Detroit's many vacant lots for $1 to residents and developers who would put them to good use.

Another example is the city's $67 million-per-year Public Lighting Department, which is operating at a $10 million deficit. Candidates Hill and Nicholas Hood, a city councilman, both expressed interest in the idea of privatizing this service, a move that has saved other cities millions over the past few decades. According to the American Power Association, 39 public utilities throughout the United States have been privatized. "Two or three years ago, we were promised by this time we wouldn't have any lighting problems and we're still having power problems," Hill recently told the Detroit Free Press. "I'm open to any idea where the people of this community will not be inconvenienced again." A poll of Detroiters this summer showed 42 percent of residents in favor of privatization, 49 percent against, one of the strongest showings yet for privatization in a city dominated by labor unions.

Of course, time will tell whether the winner of the contest will follow through with any of these proposals. Most likely areas for privatization-eliciting the widest support among the candidates-appear to be smaller, simpler matters such as snow removal. Then again, businessman-turned-mayoral-candidate William Brooks called for private managers to run Detroit's transportation and bus services, a major undertaking that most certainly would open the door to bigger things.

Two things are certain: 1) Privatization has earned political respectability in Detroit, a place where even discussion of the issue used to be taboo; and 2) The pressure to privatize will only increase as long as city officials resist the most cost-efficient solution to many of Detroit's most persistent problems. Editor's Note: For more on privatization ideas for Detroit, see page 20 in this issue, or the winter 2001 edition of MPR.