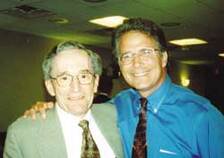 Tennessee educator and researcher William Sanders (left) and State Superintendent Tom Watkins (right) discussed student testing at a July 19 State Board of Education meeting. Sanders explained a new form of evaluation that Michigan may implement in the future.

The state of Michigan likely would have to change how it tests public school students, if legislation including new federal testing requirements passes Congress and is signed by President Bush.

The legislation, intended to promote greater school accountability by tracking student achievement, is in a joint committee, where legislators are working to reconcile differing versions approved by the Senate and House earlier this year.

Currently, Michigan students participate in Michigan Educational Assessment Program (MEAP) testing in the fourth, fifth, seventh, eighth, and 11th grades. The state-mandated tests are intended to ascertain how well students have learned the state-established curriculum in the areas of math, science, reading, and writing.

Revamping the present system to conform to whatever new federal mandates, if any, are passed might be a monumental task, but some officials see it as an opportunity to better link testing and accountability.

On July 19, William Sanders, a Tennessee educator and researcher, met with Michigan State Superintendent Tom Watkins and members of the State Board of Education to explain a new method for improving accountability called "value-added assessment."

Value-added assessment creates the opportunity to track student achievement, as expressed by test results, on an annual basis, as well as monitor trends in teaching and learning over time.

"The single biggest factor affecting students in the classroom is the teacher," says Sanders, who manages a company, Value-added Assessment and Research. According to his research, the residual effects of a teacher on a student can be seen up to four years after that student leaves the classroom. These effects, along with student gains in performance, can be traced using value-added assessment.

The goal of value-added assessment is to measure academic growth for all students. "A minimal expectation is for each kid to make at least a year's gain in a year's time," says Sanders. The proposed federal testing requirements may help Michigan schools and teachers measure student performance according to the value-added assessment model, something that is not possible under the present MEAP system.

Currently, Michigan's MEAP test is not designed to measure student-level yearly growth, since it only assesses students in certain grades and does not track individual students over time. Michigan's testing plan would have to be restructured before a value-added assessment system could be implemented.

There are two major challenges with using the MEAP for value-added assessment. First, MEAP is a criterion-referenced test, meaning the test measures specific content information as determined by the state and/or curriculum. Second, the testing pattern with MEAP tests make it impossible to measure yearly student academic growth. Students are not followed year-to-year, school-to-school, to track academic progress.

According to Sanders, value-added programs work best with year-to-year testing using norm-referenced tests, which compare an individual student's results against the total results for a group of students. Norm-referenced test scores are often designed to produce results that can be illustrated by a bell curve with the highest percentage of students placing in the middle. Most large-scale national exams such as the ACT are examples of norm-referenced tests.

Sanders explains that yearly student-level testing would provide more information on Michigan's educational system and could aid in school improvement and accountability efforts. "The best insurance policy is to test each kid, each year in all subjects," he says.

State school officials say a plan to create a student-level testing program has been on the back burner for some time. Given the recent discussions over school accountability and standardized testing at the federal level, the state may be forced to implement a new assessment program in the near future.