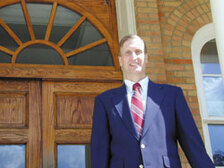 Dr. Robert Hanna is the Teacher Education Program Director at Hillsdale College. Hanna says, although the state requires elementary and high school teachers to be certified, college professors do not have the same requirement; they must simply be proficient in their field. The state may consider restructuring K-12 teacher certification requirements this way to allow more teachers into the field.

Consider the following contradiction: A looming teacher shortage of catastrophic proportions has America's public education system frantic for a solution. In the next decade, nearly two million new teachers will be needed because of class-size reductions, teacher retirements, and enrollment increases. Yet resistance to the idea of privatizing or even loosening teacher certification-one of the main culprits in the teacher shortage-remains strong within the school system. Just one example: The bylaws of the American Association of Colleges for Teacher Education specifically prohibit for-profit membership.

The Michigan House Education Committee recently approved legislation that would allow local school leaders to decide whether a person is qualified to teach.

In every state, prospective public school teachers must receive government approval before they can practice their profession. The degrees of regulation guiding teacher certification vary from state to state and often program to program. In Michigan, there are 32 different state-approved programs through which prospective educators can be licensed to teach. All of these impose time-consuming and costly demands on prospective teachers-demands that severely limit entry into the field of teaching, often keeping out the best and the brightest. This is particularly true for those wishing to make career changes.

Consider the process involved in earning the right to teach in secondary education through Saginaw Valley State University. An examination to prove that students have basic skills in reading, writing, and mathematics is just the beginning. Following that, students must endure eleven 15-week courses in education, serve 80 hours as an "observer" in a current instructor's school classroom, and put in another 14 weeks teaching under supervision. They must then take a Michigan Test for Teacher Certification in their subject area of expertise. This is usually done as part of a degree program at Saginaw Valley. The process can easily take more than two years of full-time work.

Of course high standards are important, but is there a better way to get qualified teachers? The original purpose of the process was to ensure quality, but according to the U.S. Department of Education, 36 percent of public school teachers, or 972,000 out of 2.7 million nationwide, didn't major or minor in the core subjects they teach. Dr. Sam Peavey, professor emeritus at the University of Illinios, is among many experts who argue that "after 50 years of research, we have found no significant correlation between the requirements for teacher certification and the quality of student achievement." In short: Certification doesn't necessarily result in qualification. Indeed, in many cases it may do the opposite.

What would be wrong with allowing working professionals who earnestly desire to teach but haven't the time to devote to endless pedagogical exercises of dubious value to enter the profession more easily? Fortunately, a number of states have begun opening up the teacher certification process. They are linking arms with private companies to address the looming teacher shortage.

The Sylvan Teacher Institute currently spends about $1 million per year on a program that takes under-prepared or uncertified teachers and brings them up to speed, in partnership with local school districts. The state of Maryland is currently paying Sylvan to certify teachers for schools in Prince Georges County and Baltimore, at a rate of $6,500 per teacher. According to officials in Baltimore, the results of the Sylvan program-which has been approved for school districts in Texas and Wisconsin-include higher retention rates, excellent teacher quality, and high ratings from principals. According to Jianping Shen, Western Michigan University assistant professor of educational leadership, teachers that enter the field through alternative certification programs are more likely to have degrees in math and science, two fields with chronic shortages of qualified instructors.

The for-profit University of Phoenix, which offers professionals a way to earn teacher certification while practicing their current professions, is expanding the number of states in which it can offer programs. The school has opened negotiations with both the American Association of Colleges for Teacher Education and the National Council for Accreditation of Teacher Education for membership. And Edison Schools, probably the best-known for-profit manager of public schools in America, is planning to open Edison Teacher Colleges across the United States and online as early as 2002.

Is Michigan open to the idea of relaxing tight requirements and allowing these and other companies to prepare teachers? It's hard to tell. In 1993, the state board of education showed a glimmer of openness, when it adopted an alternative certification program. Known as the Michigan Alternative Routes to Teacher Certification program, it does reduce the amount of time prospective teachers must invest in becoming a teacher, but not by much. Indeed, this program still takes 12 to 18 months to complete-even as a full-time alternative student.

Another glimmer of hope: The Michigan House Education Committee recently approved legislation that would allow local school leaders to decide whether a person is qualified to teach. If approved, such a move from state to local control could allow inroads to be made on both the requirements for certification as well as on who prepares prospective teachers.

Opponents of alternative routes to teaching commonly argue that this hurts accountability. But under the current system, an incompetent teacher is terminated with extreme difficulty-or even not at all. Under a system in which accountability for certification has shifted from the state government in Lansing to the schools themselves and the school boards, concerned parents would be able to have an impact when they discover their child is being ill served.

Principals should be able to advertise for, interview, and hire people that are capable of transmitting knowledge successfully. Indeed, principals would probably work harder to guarantee that their teachers are qualified, knowing that the state has removed itself from the process. And they could be held directly responsible for results.

Under a system of private certification, private for- and non-profit groups would compete to provide the best teachers to schools. Over time, the best would rise by reputation. One certification group might require a minimum of a bachelor's degree and 10 hours of lecture training to earn its seal of approval. Another might demand a master's degree, or any other imaginable combination of real-world experience and classroom training. Schools could then interview prospective educators and know, based on which private certification has been earned, the precise nature of the applicant's training, and hire-or not-accordingly.

For decades now, too many in the public school system have tried to ignore ever-lower student achievement and poor quality teachers. But over time, when a problem is ignored, other stickier problems arise, caused by the first problem, until people are forced to do something about it. Over time, aspiring professionals began to disdain a career in which excellence is no longer honored. Now we have a shortage of teachers, and the major obstacle to a solution is what many are calling a "mediocrity requirement."

Perhaps it's time to let the private sector help decide what an excellent teacher is. 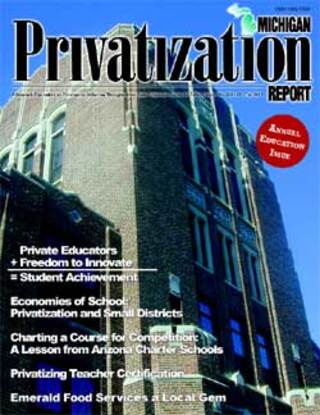