What Have We Learned in the COVID-19 Lockdown Era?

We don’t have the luxury of waiting until the pandemic ends to assess what we’ve learned. We can’t afford to wait for all the proverbial data. People need help now, and we need to help now with the knowledge we have. Here are some things we know after 18 months.

Fear and greed are far more potent than we realized. Millions of people voluntarily and immediately limited their own activities and eagerly obeyed unprecedented government restrictions in exchange for a promise of some protection from the new virus. Not letting a crisis go to waste, government officials furiously issued diktats which increased their control of our lives, while media companies stoked customers’ fears, every click and every view adding to their bottom lines. COVID is the health of the state. And of the media.

The pandemic was not a “black swan.” The lockdowns were. (A black swan is an extraordinarily unlikely event with extreme consequences.) A pandemic like COVID was thoroughly predicted. But we didn’t anticipate the politicians’ fervor to impose lockdowns denying civil rights, the willingness of people to submit to them, or, especially, the technology that enabled them. Without Amazon and Zoom, there would have been no mass lockdowns: Their political price would have been too high for politicians to pay.

Even power-hungry politicians must yield at some point, no matter the emergency. College football is back, complete with tens of thousands of potential COVID spreaders breathing on each other. Why? No politician wants to be the first one to lose an election for ordering people to stop watching football. In Michigan, Gov. Gretchen Whitmer held a hard line on lockdowns as long as her job approval ratings remained in the low 60s. When they slid, she eased her edicts. For most politicians, politics > science.

Sometimes lawmakers don’t actually want to govern. Gov. Whitmer achieved nationwide fame for arrogating to herself unilateral pandemic-fighting powers, bypassing the Legislature. She issued nearly 200 executive orders, leaving little of Michigan society untouched. Legislators said they wanted a voice in pandemic policy, but when the Michigan Supreme Court invalidated the governor’s executive orders in a case brought by the Mackinac Center Legal Foundation, they did not send the governor their own policies. So she continued most of what she had been doing before, until the public began to sour on her job performance.

Government transparency remains a strong bridge between the philosophical left and right. Even our friends on the left applaud the Mackinac Center’s work to get to the bottom of Michigan’s data on COVID-related deaths in nursing homes. We’ve been to court to make the state open its books on how the governor’s policies may have put vulnerable people in harm’s way.

That’s not all we learned, but it’s all that will fit here.

The times are unsettled. People yearn for certainty and stability. The Mackinac Center was formed to advance sound ideas in the policy world — in easy times and especially in hard times. What that means for us now is that it’s a great time to be a leader. 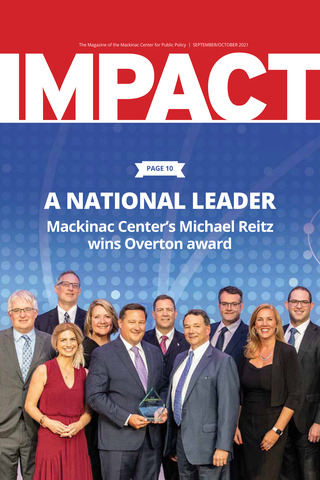