Love for Life and Liberty 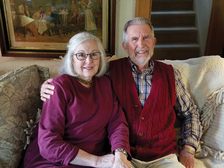 The unwavering faith and love John and Martha Pafford have for each other and the liberty of all people is evident to all who enter their Catalogue English Tudor home in Midland, Michigan. The shared principles and varied interests of the thoughtful but straight-shooting academic and his animated, ever-ladylike interior designer wife leave all who pass through the home with a renewed vigor for life. In many ways, a successful free-market think tank seeks to blend unique talents and foundational principles in a similar fashion.

John grew up on Cape Cod, Massachusetts; Martha is from Washington state but lived much of her life in Oregon. They met in Washington shortly after the Martha’s first husband passed away unexpectedly and she was left widowed with three children. John had recently moved to the Pacific Northwest and was working in ministry to evangelize and promote church growth. The two grew very strong in their Christian faith, which is evident in all that they do. Martha had a career in modeling with three major clothing brands, and never took a union job. Being nonunion gave her the opportunity to be in national ad campaigns that unionized East Coast models, particularly those in New York, were priced out of. John grew up close to the historic home of President Grover Cleveland, but more distant and seemingly more adventurous history intrigued him early on; this turned out to be ironic, as he grew to admire and publish a book on Cleveland years later.

Political opposition to New Deal programs and government spending were regular discussions at home when John was growing up, but his own study and education lead to his free-market perspective. “I dabbled into socialism in college, but once I began reading for myself, I learned that dad was right!” He went on to support Barry Goldwater’s 1964 presidential campaign and understood that the implications of his loss were grim, but John always remained an optimist, believing in the power of the American spirit. John and Martha saw that spirit and the prevailing freedom — which came at great cost — following the attack on Pearl Harbor when they were very young and after the Sept. 11, 2001, terrorist attacks. They are reminded that the right policies, educating the next generation and defending freedom have seen the United States through tumultuous times.

John realized he was an ideas man after working in real estate management and at a bowling center, both of which were successful family businesses. He went on to work in ministry at the Christian Freedom Foundation, had a full career in academia, and has published noteworthy titles since his retirement from Northwood University.

The Paffords moved to Midland in 1976 when John accepted a teaching job at Northwood. John was student of Russell Kirk when he earned his doctorate, and the conservative icon was the subject of his early books. In 1980, John was a candidate for Congress in the Republican primary. John worked alongside fellow Northwood professor Larry Reed, who went on to be the first president of the Mackinac Center. During his career, he taught a number of future Mackinac Center staff members, and he assured us that director of fiscal policy James Hohman did in fact earn an A.

Coming from free-market minded families and arriving at that life philosophy independently make John and Martha natural partners with the Mackinac Center, but their connection runs much deeper. John and Martha made their first gift in the form of wicker chairs when it opened its doors behind Pizza Sam’s in Midland. As an interior designer, Martha saw it as her duty to ensure that the humble office had a functional but professional appearance, so she and her daughter purchased a few chairs for guests and created a welcoming environment.

John and Martha admire the Mackinac Center’s commitment to principle and its efforts to use multiple means and styles of communication. They believe finding the right style is important; Ronald Reagan’s ability to speak personably, along with his charisma, is what, in their minds, set him apart from Goldwater. Martha’s charming tenacity got her, along with John and their daughter, into a venue to see Reagan’s charisma on display. John’s leadership in conservative politics earned him an invitation to a small group meeting with Reagan when he was president, and there was a mix up on the guest list, which Martha was able to solve; the inspiring interactions and memory of the day sticks with them.

John believes in the political philosophy expressed by Russell Kirk, of “the expansion of order, justice and freedom.” His tenure and Northwood and understanding of the Mackinac Center’s effort to advance liberty as an educational research institution have put that belief into practice. In many ways, people who support the Mackinac Center shape public opinion and advance free-market ideas through their giving, volunteerism and participation at events, and by advancing the mission through word-of-mouth and sharing publications. That’s why John and Martha support free-market research and education, worked diligently to connect with a major publisher years ago, and have maintained that relationship as John published his latest book on President Chester Arthur earlier this year.

The Paffords think the rhetoric and radical policy proposals of national leaders on the political left reflect their fear of individuals who understand and are equipped to defend free-market ideas. In John’s words, “There are no perfect times or countries, and there hasn’t been since Eden.” Reflecting on his past experiences, from having German prisoners of war in his hometown to life in the present, John remains a believer in American Exceptionalism. Though the country isn’t and has never been perfect, he has maintained an optimistic view that free-market ideas will prevail. Defending Michigan’s right-to-work law and effectively fighting new taxes and spending are key priorities that John and Martha see the Mackinac Center leading the charge on.

John and Martha think that the sound research and voice the Mackinac Center provides has made wins like right-to-work, ending the dues skim, and advancing school choice possible by networking individuals and providing them with intellectual ammunition. In the end, protecting and enlightening others on the fundamentals of a free society is what continues to bond John and Martha to the Mackinac Center more than 30 years after the gift of wicker chairs. “Law shouldn’t have to cover everything, but we must protect life, liberty and property.”

To learn more about becoming a Mackinac Center supporter, contact Caleb Hortop or a member of the Advancement team any time. Our growing donor clubs, event tracks and the Opportunity Michigan network make it a great time to join a community committed to advancing liberty.