A Free-Market Solution to Water Pollution 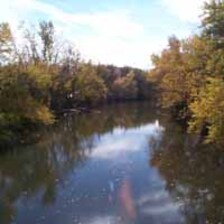 The Kalamazoo River may be the first to benefit from a new, incentive-based pollution trading program.

Is it possible to reduce pollution without using the coercive power of the state to lower the boom on companies, farmers, businesses and individuals? Would free citizens in a free society have sufficient incentives to protect the environment without using force?

Michigan is doing it. The state has recently developed a market-oriented water improvement program intended to minimize the level of harmful chemicals, such as phosphorus, in rivers, streams, lakes and ponds.

Phosphorous is a substance used in fertilizer and detergents. If too much of it enters a body of water, algae growth can choke off oxygen and kill large quantities of fish.

Michigan's program, launched as a pilot project for the Kalamazoo River, is a public-private partnership that teams farmers and the agricultural community with industry and community leaders. Its goal is to reduce the levels of phosphorous entering "watersheds"—lands such as farms, across which water flows on its way to a stream, river or lake.

The voluntary program works by allowing farmers and manufacturers to buy and sell "credits" they have earned by reducing their own pollution. Let's say a farmer reduces the level of phosphorous in the water runoff from his land beyond what he is currently doing. This reduction may be enough to generate a pollution "credit," which he can then sell—for a competitive price—to a company whose manufacturing or processing produces pollutants.

The company, say, a water treatment plant, could then redeem the credit, which would allow it to emit one additional "unit" of pollution, rather than pay the higher cost of reducing its pollution by the same amount without exceeding their permit. The size of this allowed "unit" of pollution would be half the amount of phosphorus that the farmer eliminated from his runoff.

Or, the company could add the credit to its current stock and eventually sell its own credits to yet another company for a higher price than it cost the first company to reduce its levels of pollution. Thus, the overall amount of pollution decreases even as farmers and businesses pursue an economic incentive. Farmers can even use the money they make from the sale of pollution credits to further reduce their phosphorus runoff, and companies can do likewise with the money they make by selling the credits they earn. When compared with the millions of dollars manufacturers would have to pay for installing new equipment to reduce phosphorus discharge directly, they can often purchase credits at a lower cost and still achieve an improvement in water quality.

Two feasibility studies have demonstrated tremendous potential for water-quality trading. The first study, in which the Michigan Department of Environmental Quality examined farming around Saginaw Bay, showed farmers would reap significant savings by reducing phosphorus levels in their water runoff.

The second study, conducted by the World Resources Institute, an environmental policy research group, not only examined Saginaw Bay but also Wisconsin and Minnesota and came to the same conclusion.

Savings from adopting such a program would allow Michigan businesses and municipalities to expand without further pollution or expense. In addition, it would spur discovery and improve monitoring of surface waters as they become cleaner. Farmers and manufacturers alike would become more environmentally efficient, assured that their efforts and investment would be rewarded.