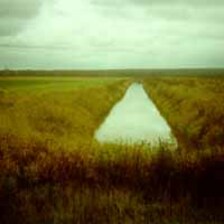 A distinctly unnatural-looking suction canal was gouged from the earth by government digging.

People who believe government is a better manager of environmental quality than private land owners should look at the record of government-sponsored environmental failures. Local, state, and federal governments have far from pristine records when it comes to management of ecologically sensitive wilderness areas.

One of the most egregious examples of government mismanagement of the environment is taking place right here in Michigan. The whole cast of nasty characters is present: big money, bad incentives, byzantine bureaucracies and botched environments.

The Delenes were ultimately ordered by the state to destroy the wetland they spent years creating.

For more than two decades the Michigan Department of Natural Resources (DNR) has been doing tremendous harm to over 3,000 acres of natural wetlands in the Upper Peninsula. The project, known as "Arnheim Sloughs," is located in Barraga and Houghton counties.

Before 1975, a large piece of land near the Sturgeon River, called the Sturgeon Sloughs Wildlife Area, existed in its natural state as a flood plain during the spring high-water season. The area, home to black bear, bobcat, deer, northern pike and numerous other land and water species, was one of startling natural beauty. Indeed, the Sturgeon Sloughs contained one of the most extensive tracts of Tamarack (a species of pine) trees in Michigan.

Then, out of the blue in 1975, DNR bureaucrats decided it was necessary to attract more migratory waterfowl to the area. While the desirability of this improvement upon Mother Nature may strike some as beyond dispute, it raised the suspicion of former State Representative Stephen Dresch, who suggests another motive for government actions that followed. 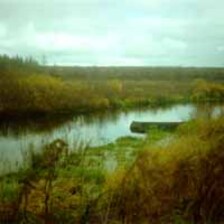 An unsightly pipe empties sediments into a drainage ditch in the Arnheim Sloughs project.
More images …

Dresch believes Arnheim Sloughs "was initiated under orders of late House Appropriations Chairman Dominic Jacobetti, at the request of a local farmer for whom wetlands were converted into tillable fields."

What followed was a unnatural disaster for the area. The Arnheim Sloughs project began with bulldozers diverting the Sturgeon River in several spots. To facilitate this process the DNR created nearly 13 miles of dikes, 1,100 acres of artificial ponds, bulldozed the Tamarack stand, and cleared roughly 335 acres of natural vegetation where a field of potholes now lies. The Department of Natural Resources also lowered the natural water table so that heavy machinery required to clear the wetland could operate with greater ease.

Unfortunately, the soil in regions where new ponds were created is sandy and unable to support standing water. In order to keep a sufficiently high water level in the desired areas, the department erected large pumps, similar to those used for removing oil from the earth. But this caused another major problem. Frightened by the noisy and unsightly pumps, the waterfowl the area was supposed to attract migrated elsewhere. Thus were approximately 21.5 square miles of flood plain rendered ecologically nonfunctional by the DNR's actions.

Funding for the Arnheim Sloughs Project came from three major sources. For every two tax dollars the state of Michigan spent from its Game and Fish Protection Fund, the project received another four tax dollars from two federal environmental programs. In other words, the federal government gave the state of Michigan an economic incentive—double the money—to tamper with the environment, whether there was a problem or not. So it did.

In stark contrast to the Arnheim Sloughs project, just 30 miles away, lies the property of Richard and Nancy Delene. In the late 1970s, the Delenes purchased 2,500 acres of property with the intention of rejuvenating a wetland entirely at their own expense—which they accomplished successfully. The result was an astonishingly successful improvement in plant and animal habitat. According to environmental experts, the ecosystem was changed drastically for the better.

The Delenes, who had intended to retire on the new wetland, carefully researched, executed, and paid for a well-engineered plan that removed stunted trees and dense vegetated mat, collected surface waters into a series of ponds, and stocked the ponds with bluegill, perch, bass, minnows, frogs and other small invertebrates to create a self-sustaining ecosystem.

An evaluation of the project by Whitewater Associates of Amasa, Michigan, found that the new wetland provided enhanced habitat for 132 bird, and 38 mammal species and created new habitat for an additional 101 bird and 22 mammal species. Total cost to taxpayers: zero.

And now, "the rest of the story." It turns out the government does not take kindly to being outdone by private individuals on its pet cause. Through a series of disagreements and misunderstandings over the issuance of government permits for their wetlands project, Richard and Nancy Delene lost control of their wetlands.

When the Delenes began their project, authority for issuing permits rested with the United States Army Corp of Engineers, which approved the wetland project over the objections of the DNR.

But by early 1990 (when the Delenes attempted to expand their wetland) authority for permits had been transferred from the Corp to the Michigan DNR. The Delenes applied to the DNR for the

necessary permits but their application was held up. Instructed by their attorney that the permits had been awarded by default, the Delenes proceeded with their project. But the DNR saw it differently and in 1992 the state filed suit against the Delenes, alleging that they had violated of the Wetlands Protection Act and other laws.

The Delenes were ultimately ordered by the state to destroy the wetland they spent years creating. To date, they have not complied with the state order and the case remains in legal limbo. The Delenes, meanwhile, having tasted the heavy hand of local law enforcement (which reportedly included the posting of snipers when they were first placed under arrest), fled Michigan to avoid arrest on contempt and other charges.

What do these contrasting examples teach us? Government can be as self-serving and blind to the environmental harm it causes as any private-sector polluter—and twice as dangerous to the environment, because government wields the force of law.