Chartering Environmental Education: Teaching from the Ground Up 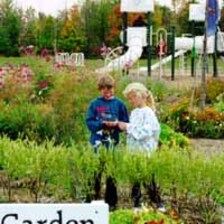 Children at the West Michigan Academy of Environmental Science in Walker study the school's herb garden.

Spending time on a lake, at a horse stable, and in a garden are more than recreation for some. Thanks to the flexibility of charter schools, or public school academies, such activities have become learning experiences for hundreds of Michigan school children.

Schools that adopt environmentally based curricula cater to a niche market that was going unserved before students had the freedom to choose among competing schools.

At the West Michigan Academy of Environmental Science in Walker, 60 acres of land provide students with an outdoor classroom. The grounds include marshland, a small lake, an apple orchard, greenhouses, farmland, hardwood trees, meadows and gardens. A prairie of flat or rolling grassland is being developed.

Students don't fit into one-size-fits-all curricula. That's the beauty of charter schools and of school choice in general.

"It allows for the study of plants and animals, and how people affect the environment," says Sally Moore, West Michigan Academy Principal. The Academy has students in grades K-8.

A similar 750-acre "land lab" is the setting for Countryside K-9 Charter School in Benton Harbor. Tom Hurst, Director of Agriculture and Natural Resources at Countryside says the classroom becomes a living experience at the school. "We bring animals in, and have tree identification sessions, and we don't have to travel," he says.

A nautical theme is used at Sankore Marine Emersion High School Academy in Detroit, which provides students with hands-on exposure to marine biology and river ecology. In addition to the field trips the students take, "we plan on purchasing a ship so we can have a 'floating classroom'," says Ronald Spears, Director of Business Affairs for the high school.

"Field trips are not a problem. MSU is easy to do, Indiana Dunes is easy to do," Hurst says. Last year students went on a four-day trip to West Virginia for class while hiking and rafting, and studying river ecology. Students at Countryside go on a minimum of four field trips each year, which they choose from among dozens sponsored by the school. West Michigan Academy students also take frequent trips to the parks at Grand Valley State University and to local zoos.

Even clubs and extracurricular activities expose students to nature at each of the schools. Countryside requires membership in the Future Farmers of America for its high school students. At Sankore Marine Emersion, students can participate in the Navy Sea Cadet Corps off Belle Isle. During part of that program, students go to a two-week "boot camp."

Subjects including literature and current events are unified by an environmental theme. "Connectedness" is the word Hurst uses to sum up the goal at Countryside. "We want them to be sympathetic to forestry, lakes, soil sciences. We learned the hard way and we would like to try not to do it again. We want them to understand the connectedness of the land to life and education," he says.

Besides the curriculum, what sets these schools apart is their open door policies. "The main difference is the lack of bureaucracy. If a parent has a concern there is no superintendentthis is the school. It allows openness and immediacy," Moore says.

Although environmental charter school administrators hope students may decide eventually to enter environmental and agricultural careers, the main goal at West Michigan Academy is "to have students serve as role models at their future schools for taking care of the environment and understanding the importance of the health and well-being of the environment," Moore says.

Ronald Spears has similar hopes for his high schoolers at Sankore Marine Emersion. "We would like our students to be able to attend Naval Academies, West Point, or to get into specialized marine/aquatic college programs. We would like to get as many qualified as possible to be able to receive college scholarships," he says.

How did the idea for environmental charter schools develop?

At Countryside, some local farming families believed agriculture studies were not being stressed enough in traditional public schools. According to Hurst, the families found that their children were not developing an understanding of where and how agricultural products are produced. These concerns became the basis of a community effort that resulted in the founding of Countryside School.

Sankore Marine Emersion started in a similar way. Spears and Dr. Arthur Carter owned a boat company in the Detroit area, and traditional government schools used to charter their boats for field trips. Spears says the students showed such enthusiasm for the study of marine biology, they decided to open their own charter school.

Creating an environment for students with attention problems is also a reason these schools are needed says Dave Lehman of the Leona Group, a charter school management company. "They offer hands-on schooling and many kids can't sit still for 6-8 hours. They need to move around, and this gets them moving and asking questions."

Interest in charter schools with an environmental theme is on the rise. Countryside has reached full capacity enrollment over the three years it has been open, with 380 students, compared to 250 and 180 in previous years. West Michigan Academy has 484 students. Although it has cut back on the number of grades they teach, it is in its sixth year and is receiving a steady stream of phone inquiries. Sankore Marine Emersion has also increased enrollment from last year, which was their first year. Sankore now has 230 students in two grades, compared to 160 ninth graders last year.

Students don't fit into one-size-fits-all curricula. That's the beauty of charter schools and of school choice in general: Kids can concentrate work in math, art, or environmental science—or any other area that helps maximize their potential as people and as scholars.