The Michigan Business Development Program targets employment impacts, thus evaluating the effect MDBP credits on total and sectorial employment offers potential for understanding better the employment dynamics related to the incentive. To perform this analysis we will model impacts on a short time period of quarterly data from 2012-Q1 through 2016-Q4. The data are drawn from MSF-MEDC reports on individual firms and the Quarterly Workforce Indicators on employment and employment by sector.[1]

The use of a PVAR is appropriate when assuming an unknown level of endogeneity between the variables, and thus employs a series of lagged variables to compute the effects. We do however assume an ordinal nature of endogeneity, thus the order of estimation proceeds with the incentive, then employment and finally spatial employment. This ordering of the variables is a Bayesian approach (see Caldara and Kamps, 2008; Lof and Malinen, 2013).

A few econometric considerations are appropriate in constructing the details of a spatial PVAR. First the variables of interest are nonstationary.[2] This necessitates the use of first differenced variables, which reduce some to the potential structural relationship between variables. However, since we are evaluating the impact of the incentive on employment this is not cause for worry and we discuss a departure from the Bayesian approach in the results section.

This time period was one of economic recovery from the Great Recession of 2007-2009, so growth in manufacturing employment should be expected. That necessitates the use of an exogenous trend, and the quarterly frequency of the data argues for seasonal dummies, which we employ in Q1-Q3. The lag structure was chosen through the minimization of the Akaike Information Criterion and selected at eight quarters from the announcement date.

The construction of the spatial lag was done using the first order contiguity matrix, W, so that for each county i, the population weighted average of these variables are calculated for contiguous counties. Economic applications of this appear in Hicks and Wilburn (2001) and Hicks and LaFaive (2011).

Ζi,t is the first differenced values of the endogenous variables (employment, spatial employment and incentives), in county i, in year t;

a, a common intercept,

δ is the matrix of coefficients for the value of lagged endogenous variables (employment, spatial employment and MBDP incentives);

Ζi,t-n is the lagged endogenous variables (at four lags as per AIC)

The β matrix are the coefficients for the trend and quarterly dummies;

εt the error term where we assume εt → iid N(ο,σ).

Summary statistics appear in Graphic 2 below.

Evaluating the effect of incentives offers several challenges to an econometrician. We cannot know, a priori, for example, the exact timing of the resulting start of new hires or time of when actual construction on a new project occurs at a particular location. We also must be concerned with the possibility that the incentives are going to firms who are choosing more favorable or less favorable places to locate. If the choices aren’t random, this risks some bias in the estimated impact. This is known as endogeneity bias, and is a problem that plagues research on incentives of all kinds.

To address this, we propose a very flexible model that allows the impact to materialize at different speeds. We also favor this model since it allows us to test endogeneity, with very few assumptions. We include a spatial component for most estimates for the very understandable reason that labor markets cross county borders.

Finally, we report the impulse response function rather than focus on the statistical model for two reasons. First, the accumulated lagged impacts in the estimation output are difficult to interpret without additional computations. The additional computations are the IRF, which we will illustrate. Second, the IRF is an appealing visualization of the estimated effects of these incentives on employment, which was a stated goal of the policy. These IRFs provide us a simulation of a large shock (typically one standard deviation) of the incentive on employment. Thus, the IRF tells us the cumulative effect of the MBDP incentive on employment, both annually and cumulatively over time.

[†] Total employment, manufacturing employment, spatial values of each and the MBDP funding all fail a unit root test at the 0.001 level. (Levin, Lin and Chu, 2002). Nonstationary variables are those which exhibit a time trend and will thus possess a spurious correlation due to observation over time. 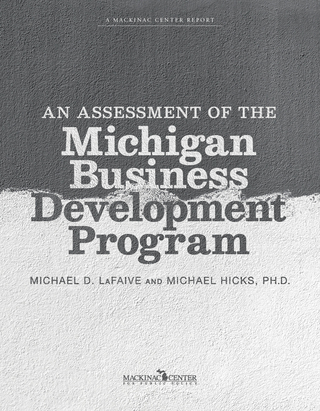