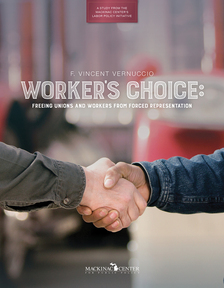 Unions may be taking a Hail Mary approach to eliminating right-to-work for the entire country. On June 2, The Wall Street Journal noted that unions have recently brought court cases challenging right-to-work in Wisconsin and Idaho. The lawsuits claim that right-to-work laws violate the U.S. Constitution’s takings clause. The reason, they say, is that in a right-to-work state, they must represent all the workers at an organized worksite — even the ones who pay them no fees.

Depending on the makeup of the U.S. Supreme Court next year, unions could use this argument to overturn seven decades of precedent, killing right-to-work everywhere.

Fortunately, the Mackinac Center was ahead of the curve. In 2015, F. Vincent Vernuccio, its director of labor policy, published a study introducing the
concept of "Worker’s Choice."

Worker’s Choice would free both unions and workers from unwanted representation. It would allow workers to represent themselves and also free unions from having to represent so-called "free riders." Even in right-to-work states, where a union cannot get a worker fired for failing to pay dues or fees, workers in a unionized worksite must accept the union's representation whether they want it or not. That makes them forced riders, not free riders. Unions must provide representation to these workers because they are given a monopoly at the bargaining table; despite their statements in the past, they have lobbied for that privilege.

Worker’s Choice reduces the problem of free or forced riders and therefore could save right-to-work against the unions' legal argument. It has several other benefits, too:

From a legal and policy standpoint, Worker’s Choice is the next logical step in worker freedom. The Mackinac Center will continue to educate lawmakers, employers and workers about its benefits, both state-by-state for public employees and on a federal level for private sector employees.