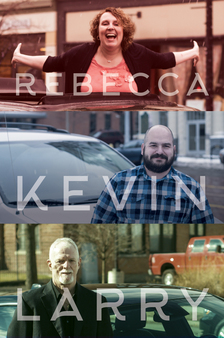 After spending three years building a church from scratch, Kevin and his wife were stuck. The congregation was a labor of love and a large part of their income, but running it in addition to raising their family of four had proved challenging. They closed the church.

Kevin scrambled to find a new source of income, but he wasn’t having much success. His part-time job as a mason laborer helped, but it wasn’t enough to make ends meet, and the family was creeping ever closer to losing their home. Kevin had heard about Uber, but he didn’t know much about it. It seemed too good to be true.

He went through the background check and car inspection, but was certified to drive for the company for a few weeks before he took the plunge and headed out for his first night as a driver. He was skeptical, but he had only weeks left to prevent a foreclosure.

Little did Kevin know that he’d chosen to drive University of Michigan welcome weekend in Ann Arbor. “It was a crazy night,” he said. He took home nearly $200 — enough to begin turning the family’s financial situation around.

A couple years later, Kevin still splits his time between Uber and his job as a mason laborer, but his life has changed. His new job saved his family’s house from foreclosure, and he’s thrilled to be renovating it. He says the flexibility of ridesharing is his favorite part about it. “I can decide,' I’m not going to drive Saturday,'” he says. “If I had gotten any other job for extra income, I would have been stuck to my schedule. They don’t care that the circus is in town, or that I have four kids!”

Kevin’s story may be more dramatic than most, but the entry of ridesharing in Michigan has given opportunities to many people across the state. But Uber and Lyft, two leaders in the ridesharing business, offer more than just jobs.

Anecdotes have suggested for a while that ridesharing decreases DUI rates. With taxis often few and far between late at night and often accepting payment only in cash, they are rarely an attractive choice for those who have been out drinking. Uber and Lyft run with credit cards on mobile platforms. It’s an easier option for the inebriated, and a new study proves it.

“Ride-Sharing, Fatal Crashes, and Crime,” is a broad academic study of how Uber has helped cities across the country. It found that for every year Uber operated in a city, DUI arrests declined an average of 51.3 percent. Traffic fatalities dropped 16.6 percent every year. The authors also observed declines in disorderly conduct and non-aggravated assault charges. The only bad news was an uptick in the rate of vehicle theft.

Ridesharing is a win for lots of groups — it makes the roads safer, cuts down on congestion in major cities, and provides affordable, easy transportation for those that need it. Ridesharing drivers report they take people to work, pick children up from school and even offer an alternative to expensive parking at the airport. Some Florida municipalities have chosen to subsidize ridesharing rather than set up a bulky, inefficient public transit system.

But in Michigan, ridesharing has not always received a positive response. Some cities, such as Grand Rapids, recognized the benefits of ridesharing right away. Drivers there said the police are very friendly and supportive. But Ann Arbor has been skeptical if not hostile. The city considered a number of reactions to Uber and Lyft, but ultimately settled on cease-and-desist letters. Kevin, who drives there often, received a ticket for driving without what the officer referred to as a “certificate of authority.” Larry, a driver who splits his time between Detroit and Ann Arbor, was ticketed for operating a limousine without state certification.

Uber and Lyft are neither legal nor illegal in Michigan — they do not fit into existing transportation laws. Cities can embrace them or try to drive them out. Some drivers get chauffeur’s licenses as a safety net, but Rebecca, who drives in Grand Rapids, thinks that benefits government coffers more than anything. “It’s basically the same license I have already,” she said.

The Legislature is considering how to approach ridesharing. Last summer, the House passed a package of bills that would provide a statewide regulatory framework for Uber and Lyft. The package would put into statute the safety precautions ridesharing companies already use, including background checks and vehicle inspections, and prevent municipalities and airports from creating their own rules for ridesharing or banning it all together.

But the Senate is considering a competing plan. It would allow municipalities to pass their own restrictions on ridesharing and even allow them to ban it. Ann Arbor, where ridesharing is popular with students and the community, could do away with Uber and Lyft.

Ridesharing drivers are adamant that allowing a patchwork of local regulations is a terrible idea. One pointed out the number of cities in the Detroit metro area and wondered aloud how difficult it would be to work there if they all implemented different regulations. He speculated that the Senate legislation could push Uber and Lyft out of Michigan entirely: With so many different regulations for the companies to keep track of, expansion would be nearly impossible.

The House package awaits the Senate’s review. Kevin thinks making a smart regulatory decision about ridesharing will send a message to other innovators. “Are you going to be a state that companies look toward expanding to?” he asked. “Or are they going to be a last resort, because they know it’ll take so much money to get in here and do things?”