The Mackinac Center has been working on the issue of civil forfeiture for two decades. In 2015 we hosted events, participated in debates, teamed up with state and national allies, offered legislative testimony, met with individual legislators, conducted polling, published a study, did radio interviews and appeared in dozens of articles on the issue. Towards the end of the year, the state Legislature passed some meaningful reforms — raising the standard of evidence before property can be transferred to the state and establishing real transparency guidelines. This battle is not over — the state should ultimately eliminate civil forfeiture altogether — but Michigan is moving in the right direction. 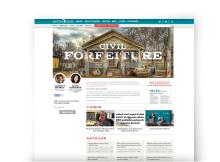 The Mackinac Center for Public Policy publishes a policy report by Dr. Donald Kochan pointing out the problems with civil forfeiture, highlighting individual cases and putting forth model legislation.

Then Mackinac Center President Larry Read calls for strengthening property rights protection, specifically in regards to forfeiture, in a study for how to improve Michigan.

A new Michigan law allows drug forfeiture funds to be used for all law enforcement purposes.

A new Michigan law subjects buildings and other real estate to forfeiture if it is involved in illegal animal fighting.

A bill is introduced that would increase transparency requirements for forfeited property. The Center’s news website, Michigan Capitol Confidential, covers the issue. It dies in the state House.

A bill is introduced that would require a criminal conviction before property can be forfeited related to drug crimes. CapCon covers the issue. It does not get a hearing.

CapCon wins an award partly for its stories on forfeiture in the “consumer watchdog” category from the Detroit chapter of the Society of Professional Journalists.

CapCon breaks a story in writing and video about several people having their property seized and held for more than a year without being charged with a crime.

The Detroit Free Press picks up the CapCon stories and does a series of articles and videos on the issue.

The House GOP “action plan” calls for changes to the state’s forfeiture laws, including transparency and considering preventing forfeiture unless there is a criminal conviction.

A package of bills that would increase transparency and raise the standard of evidence before assets can be forfeited is introduced in the state House.

The Mackinac Center hosts an event in Lansing featuring Lee McGrath of the Institute for Justice, Dan Korobkin of the ACLU, and State Rep. Jeff Irwin.

The State House overwhelmingly passes the package of eight bills.

Policy analyst Jarrett Skorup does a press call with Congressman Tim Walberg and Attorney General Bill Schuette promoting the Center’s study and the package of bills reforming forfeiture in Michigan.

The State Senate unanimously passes the package of seven bills.

Gov. Rick Snyder signs the package of bills. Mackinac Center staff are invited to and attend the bill signing.