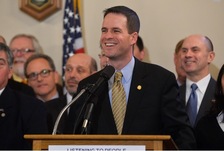 House Speaker Kevin Cotter and the GOP roll out their "action plan."

The 2015-16 House Republican legislators have laid out a solid plan with many great ideas for legislative goals they want to accomplish. Many of these priorities would limit government interference in the economy, establish more freedom for citizens and align with long-time Mackinac Center goals.

Here are the most important economic policy proposals being put forth in the plan and why they would be good for the state.

Michigan’s teacher pension system has an unfunded liability of $25.8 billion, so large that 87 percent of the money going into the system now is to make up for past liabilities. Bipartisan groups of politicians have not put enough money into the system for years; this is bad for schools, educators and taxpayers. Closing the system to new employees makes the most sense for everyone.

Economists across the spectrum agree that government price controls harm the economy. The current prevailing wage law costs schools and taxpayers hundreds of millions of dollars extra with little return on that investment. The cost of construction projects should be set by those bidding and those giving out the bid – not arbitrary mandates from Lansing.

Parents, not politicians in Lansing, should determine how their kids are educated. The best research shows that school choice is leading to better educational results in Michigan. Holding the line against those who want more central government control over education and expanding to give more options is important.

Lansing backslid on a 2007 “promise” to roll back an income tax increase, once again reminding citizens that there is rarely such a thing as a “temporary” increase in government. Michigan’s budget is increasing hundreds of millions of dollars every year – the state can afford to be less of a burden on its citizens.

It’s difficult to believe politicians when they talk about being fiscally responsible when they continue the film incentive program, probably the worst “economic development” return on investment in state government. This disastrous program should be ended once and for all.

Michigan’s liquor laws are left over from the Prohibition era and essentially require price collusion and distribution monopolies. There is no evidence that those, or other numerous silly laws related to alcohol in the state, contribute to public health and safety.

The House came up short last session on a bill that would require greater transparency for when government seizes the property of its citizens. But Michigan should go further, joining other states in preventing law enforcement from taking money and property without a criminal conviction.

Ride-sharing benefits consumers, particularly the poor. These laws are fought by current entrenched interests, but there are no good reasons the legislature shouldn’t embrace innovation by freeing up how people want to travel.

The Legislature did good bipartisan work in rolling back some low-level licensing laws last term. But ultimately, all areas where licensing is not proven to result in greater health and safety for society should be gotten rid of.

Land banks in the state are cutting ahead of private investors, cherry-picking prime property, and making crony deals that are bad for taxpayers. The market does a better job determining what property is worth. At the very least, the 40 lands banks in Michigan should not be able to take over property that isn’t blighted.

Local governments pass all kinds of bad laws that limit the freedom of citizens and lead to tremendous economic harm. It’s a good idea in many cases for the state to set consistent statutes.

The current school rating system is flawed, essentially just measuring the poverty-level of schools and causing educators to lose their jobs almost arbitrarily. It should be changed.

Michigan’s renewable energy mandate and mandated monopoly are a double-whammy of bad economic policy for the state and both should be repealed. But at the very least, companies and citizens should be allowed to buy energy across state lines just like they do other products. Since a federal judge ruled Michigan’s law unconstitutional, the legislature should do this before it is pushed through by a court.

The plan also mentions reviewing criminal sentencing guidelines, dealing with the liabilities of local governments, increasing the transparency and accountability of local “economic development” tools, establishing a better teacher evaluation system, limiting and sunsetting regulatory rules and reforming automobile insurance rules. These would all be good changes as well.

Overall, the action plan is filled with bold reforms that lower the cost of doing business by encouraging competition. That’s good for citizens and the economy. The legislature should take them up.