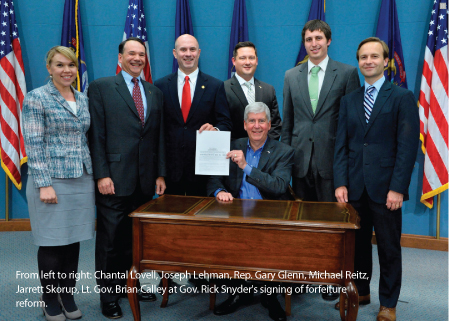 On Tuesday, Oct. 20, members of the Mackinac Center team attended the signing of a package of bills dealing with asset forfeiture in Lansing.

The Mackinac Center for Public Policy has been fighting for reforms to Michigan’s civil forfeiture laws for 20 years. These laws currently allow the government to transfer property from innocent citizens to the state without a criminal conviction and are ripe for abuse.

Last year, our news website Michigan Capitol Confidential broke stories about a state resident whose property was seized for over a year, even though he was not charged with a crime. Other articles highlighted similar stories. This year, we met with legislators, hosted events, participated in public debates, teamed up with a coalition of allies, highlighted polling on the subject, and published a study about the use of forfeiture in Michigan.

The Legislature listened and responded, overwhelmingly passing seven bills that raise the standard of evidence before assets can be forfeited and require new transparency once this property is taken over by the state.

Good progress has been made, but it doesn't go far enough. We believe civil forfeiture should be eliminated entirely, with property only forfeited after a criminal conviction. Legislators should also look at other reforms, like changing laws related to “bonding.” Not to be confused with bail bonds in criminal cases, bonding in asset forfeiture refers to the money that people must pay to get their property back from a government office. But in a state that had among the worst-rated forfeiture laws in the country, the new reforms represent a significant move in the right direction.