Why college costs are exploding 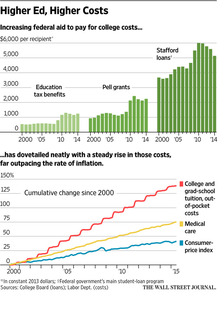 A news article in The Wall Street Journal notes that a view long held by most economists is increasingly being accepted by other scholars and policymakers across the board. Increasing federal aid for higher education, intended to make college more affordable, is driving up prices and making it more unaffordable.

The federal government has boosted aid to families in recent decades to make college more affordable. A new study from the New York Federal Reserve faults these policies for enabling college institutions to aggressively raise tuitions.

The implication is the federal government is fueling a vicious cycle of higher prices and government aid that ultimately could cost taxpayers and price some Americans out of higher education, similar to what some economists contend happened with the housing bubble.

The new Federal Reserve study found that every $1 in federal grants and loans increased tuition by between 55 and 65 cents.

Michigan spends over $1.5 billion for its 15 public universities – most of it appropriated straight from the general fund. Like federal aid, this spending likely leads to tuition hikes, which provide little return for the average Michigan resident. State policymakers should heed a simple economic lesson: Government subsidies increase costs.