Experts: Earthquakes, Water Usage Not Concerns With Fracking in Michigan 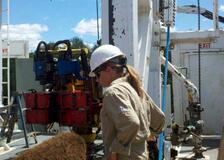 A state Geologist inspecting a rig during a drilling operation.

In the past six years, North Dakota has gone from 38th in per capita income to sixth. The state's 3.1 percent unemployment rate is the lowest in the nation and nearly a full point below second-place. And McDonald's franchises in the state are offering jobs up to $15 an hour with benefits, vacation and even a signing bonus.

In Pennsylvania, 150,000 new hires have been added over the past three years in the natural gas industry and the average salary is about 30 percent higher than the state median.

The main reason? The shale boom helped by hydraulic fracturing, or, fracking.

Fracking is a process that extracts oil and natural gas from shale formations by injecting water, sand and a small amount of other chemicals (about 0.05 percent of the mixture) into a well. It has been done in Michigan with no environmental damage for about 50 years.

While the state has about 12,000 wells, natural gas production has really ramped up in other parts of the country. In recent years, energy companies have been buying well leaseholds in Michigan, mostly the northern parts of the state, with production expected to take off in the future.

But some forces are lining up against the companies. Michigan House Democrats have introduced a package of eight bills that would more tightly regulate certain types of drilling. The group, "Committee to Ban Fracking in Michigan," is working on ending the practice through a constitutional amendment.

The main fears surrounding fracking center around water contamination from the chemicals required, the amount of water used and earthquakes. Like every policy issues, there are competing views among experts on the issue of hydraulic fracturing and energy drilling in general, but many say fears are wildly overblown.

"[T]here has been hardly any evidence, if at all, for groundwater contamination from fracking or gas wells," Siegel said.

“For example, [the] EPA has backed way off from their initial conclusions about water contamination at the two opposition poster children for failed fracking — Pavillion, Wyoming, and Dimock, Pennsylvania," Siegel said. "Neither location turned out to have water contaminated by fracking fluids in any meaningful way."

"The most closely studied water study is from Dimock. The Pennsylvania Department of Environmental Protection, the U.S. EPA and the Duke University study all say there is not a shred of evidence that anything has gotten into the groundwater from the fracking process," Engelder said.

Anthony Ingraffea is a professor of engineering at Cornell University. He has some concerns about gas drilling and has debated Engelder on the issue.

On the specific act of fracking, Ingraffea said that he "largely agrees" that it is "overblown," noting that there has not been a documented case where the specific process has contaminated ground water. But he pointed out that gas production involves preparing and drilling wells, mining, transport and water, which has caused problems.

"Fracking isn't the problem. It's everything that happens before and after that may be a problem," Ingraffea said. "There have been thousands of drinking water contaminations from spills, leaks, wells, (and) waste trucks."

Several news stories in Michigan have mentioned the movie, "Gasland," as a prominent force against fracking. The film also was cited by the leader of the main anti-fracking group in the state. The most memorable part of the film is a man appearing to light on fire water coming from his faucet. State environmental agencies had previously looked into the situation and said they were unrelated to gas and oil drilling. The director of the film knew that, but called it "not relevant."

Engelder said that "all reasonably objective reporters regard the film as misinformation."

"[When fracking opponents] mention something produced for Hollywood to support their position, [this] shows just how extreme the misinformation is," Engelder said.

Ingraffea said, "In the strict sense of the word, that [lighting water on fire] has nothing to do with the word [fracking]."

Siegal also criticized the film, noting that while "gas migration to home water supplies looked spectacular when lit up like a candle … study after study has shown that many homes have ground water naturally with methane in it, and many with methane sufficient to set on fire.

"In many places in Appalachia, well drillers for decades have installed vents to remove the methane in domestic ground water, and I fully expect this is the case in the Michigan Basin that also is loaded with natural gas top to bottom, some commercially valuable and in other places, not," Siegal said. "Should people be concerned? No."

Media accounts on the issue of gas drilling note that water usage on wells range from 58,800 to 31.5 million gallons. A Detroit News article quoted trout fishermen and a sporting store owner worried about rivers and streams.

But while the numbers sound big, that amount of water is relatively insignificant.

"The amount of water used in fracking is trivial compared to the amount of water in the hydrologic cycle in Michigan, one of the water-rich states, by any reasonable measure even during typical drought," Siegal said. "Obviously, if there is a long drought then water use needs to be considered not only for fracking but for all other uses too, agriculture to human consumption."

Hal Fitch, the Michigan state geologist, notes that Michigan has about 600 million gallons of water coming out of the aquifer every day and the state carefully monitors water usage.

"Water use for fracking is a one-time thing," Fitch said.

Experts say it also is important to compare drilling to other energy sources. For example, ethanol production, which is bolstered by state and federal mandates, uses about 38 gallons of water per bushel of corn, which is where 95 percent of ethanol in the United States comes from. According to the American Coalition for Ethanol, one bushel makes 2.8 gallons of ethanol.

According to The Earth Institute at Columbia University, "The Baker Institute estimates that producing the corn to meet the ethanol mandate for 2015 will require 2.9 trillion gallons of water."

On the issue of earthquakes, Siegel and Engelder were not concerned.

"There is insufficient energy from fracking itself to create any earthquake that could be felt," Siegel said. "The energy is literally thousands of times smaller than necessary to create such earthquakes, even if there is a pre-existing fracture or fault. Deep well injection into aquifers filled with salt water can create small earthquakes, but deep well injection into aquifers is completely different than injecting water into what literally is solid rock."

Engelder said one tremor in Oklahoma was "technically an earthquake" but not something like what people feel in California. It would also not be a concern in a state like Michigan.

This is part one in a series looking at fracking in Michigan. Part two will discuss some of the legitimate issues being debated regarding the drilling process.

Another Look At Hydraulic Fracturing

Why True Conservationists Should Cheer 'Fracking'