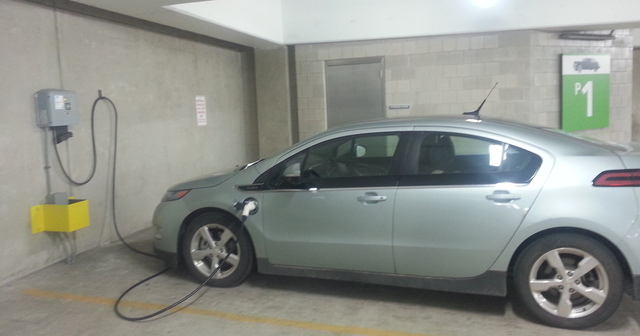 Electric Car Owners Get a Free Ride in Ann Arbor

Though electric vehicles may not be attracting much hype at the Detroit Auto Show, their owners do enjoy privileged status in the city of Ann Arbor.

While parking downtown, electric vehicle owners can charge their cars for free. The charging stations are typically located at the front of parking garages, and are reserved for electric vehicles only.

On a busy weekend, electric vehicle owners can enjoy reserved, easy access downtown parking with a free "fill up." Drivers of conventional vehicles receive no such benefit.

Pictured nearby is a Chevy Volt, a vehicle already infamous for costing taxpayers up to $3 billion in production and sales incentives, being charged at a downtown Ann Arbor parking garage. The owner really did get a free ride, because the photo was taken on a Sunday, when city parking fees are waived.

Heritage Newspapers reports that there are 18 electric vehicle charging stations in downtown Ann Arbor, and that the city's Downtown Development Authority is paying for the cost of the electricity.

The American Enterprise Institute reported in 2012 that, since 2008, taxpayers had spent or guaranteed loans of $6.8 billion for electric vehicles. Much of that money has gone to failed companies and projects. About $1 billion of that total comes from a $7,500 tax credit the federal government provides to many electric car owners.

No argument can be made that electric car owners are somehow in need of a subsidy. A 2012 survey of electric vehicle drivers found that the vast majority come from households earning more than $100,000 per year, and are predominantly, in the words of the study, "...very well-educated, upper-middle class, white men in their early 50’s..."

The primary cost of the Ann Arbor charging stations likely comes from installation (paid for by U.S. taxpayers), and the parking territory they occupy, instead of the electricity provided. According to data posted by the city, few people appear to be using the charging stations.

Surely, Ann Arbor has better things to spend its money on than this. City resources would be better spent providing essential services to Ann Arbor residents, instead of funding pet projects that only the favored few can take advantage of.