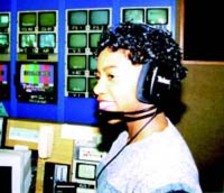 Melissa Mack's flexible homeschool schedule affords her exceptional opportunities for interaction with people from diverse backgrounds at her job at WNEM TV-5 in Saginaw.

Eighteen-year-old Melissa Mack is nothing like the withdrawn middle school student her mother remembers. And Melissa's colleagues at WNEM-TV 5, the mid-Michigan CBS affiliate where she works, would have a hard time believing the young lady was ever anything but enthusiastic and energetic.

But things have really changed for Melissa since her parents, concerned about her educational development, enrolled her in a familiar but rigorous new school six years ago: her home. Melissa is one of an estimated 1.7 million children who are homeschooled nationwide.

Although Melissa was a good student in traditional school, her classmates had begun to notice that she was the only black child among them. Her parents recall that the feeling of being different began to take its toll on Melissa, a bright but reserved girl.

"You know how children can be at that age," says her mother, Kim Mack.

Melissa was also not being challenged enough in her classes. "I got As in school and was always ahead in my studies," she says. "To be honest, I was bored."

So in 1993, Bradley and Kim Mack decided to pull their daughter out of school and educate her at home. This decision was difficult for Melissa at the time, but she now credits it for much of her current success.

"One of the best things about homeschooling was the flexibility it offered for me to pursue my interests while working at my own academic pace," she says.

And just what kind of success has Melissa achieved? In May 1998, she began a four-month internship at WNEM television studios and her abilities so impressed the station's staff that she was offered a year-round position. She now works nearly full-time at the station when she is not studying.

Melissa is just phenomenal," says Sam Merrill, former anchor of the 6 and 11 o'clock news at WNEM. "She is as good as most of the producers in this market already. She's a good writer, she's smart beyond her years, and she's got a great attitude about learning."

Recently, WNEM asked Melissa to produce its weekend newscasts. "That is an enormous expression of confidence in her ability by our news director," Merrill says. "People doing that kind of job are at least five to 10 years older than Melissa and they've been around a number of stations and have college degrees."

Melissa is working on that, too. This spring, she will earn her associate's degree in journalism from Delta College and plans to pursue an English major and journalism and broadcasting minor at Central Michigan University in the fall. She will likely earn her bachelor's degree in less than two years because she has already completed 37 hours of college coursework.

"When Melissa found out she really liked to write, we enrolled her at Delta College," her mother says. "Although she was only 15 years old at the time, we quickly discovered she was very good at it."

She was good enough, in fact, to become an editor for the Delta Collegiate, the college newspaper, and to receive a job offer from The Saginaw News, a daily paper with a circulation of 61,000 readers. To help her decide if she prefers print journalism to broadcast news, Melissa is accepting the paper's offer.

"I want to get a little more experience doing different things before I decide on a lifelong career," she says.

Melissa describes her homeschooling as "a very personal education" as opposed to the traditional school setting, which moves students at the same pace. This personal approach, says Melissa, enabled her to go slower in math or science when she needed to but cover subjects in which she excelled, such as English, at a faster pace. "I couldn't have done that without homeschooling," she says.

The Macks are also providing Melissa's four youngest brothers-Marcus, Justin, Nathan, and Quentin-with a home education. "All of my children are all unique and have different learning needs," says Mrs. Mack. "A one-size-fits-all approach will not work for them.

"I want my children to realize that learning is worthwhile and not something they have to do because 'I said so.' Learning is part of living."