Key Programs of the MEDC

As the summary descriptions above suggest, the MEDC is a sprawling and complex entity that administers or coordinates economic development monies from federal, state and local units of government. For instance, Graphic 4 lists products and services that the MEDC provides, according to its Web site. 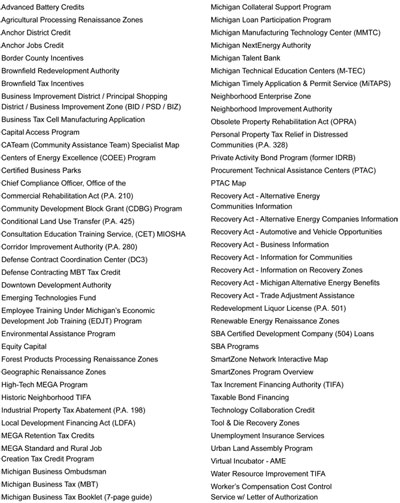 Even the basic task of linking these programs to the various departments of the MEDC is difficult. While the basic budget line items in Graphic 3 are easy enough to grasp, they barely skim the surface. Other state documents, including the legislative appropriations, are frequently vague in their descriptions of the programs or the parts of the MEDC that are involved in administering them.[71]

Rather than canvassing each program and office of the MEDC, then, we intend in the following pages to highlight several high-profile MEDC programs that are representative of the agency's attempt to stimulate economic development by directly targeting specific recipient businesses with tax credits, direct subsidies or both.

We'll begin with the Michigan Economic Growth Authority for two reasons. First, MEGA is the state's biggest, most influential and highest-profile economic development program. Its success or failure matters to the state.

Second, MEGA is designed to provide its primary benefit — credits against the Michigan business tax — only when companies actually retain or create new jobs.[*] For reasons described later, this approach is more likely to succeed than traditional development programs, which provide immediate subsidies to companies in the expectation that the companies will retain or create jobs. Hence, an assessment of MEGA's performance is a better indicator of the upside potential of MEDC programs that target benefits to particular businesses in an effort to stimulate job growth.

[*] As noted later, however, some of the other incentives MEGA arranges are provided upfront.