Mathematically, this relationship is expressed by the identity: 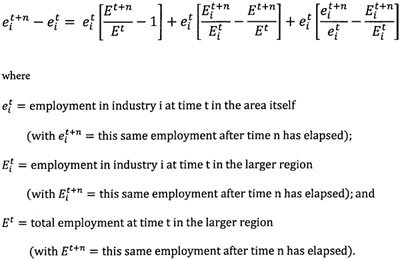 The impact of MEGA credits cannot be directly measured from this shift-share analysis. However, MEGA credits are meant to have a positive influence on an area's economy independent of overall trends in state employment or in the shift of the industrial mix in manufacturing. Consequently, MEGA credits in recent years should be strongly positively correlated with a local area's manufacturing employment growth. That can be tested statistically.

From 1995 through 2000, there were 107 MEGA deals, and the life of the credits ranged from five years to 20 years into the future. For the purpose of this analysis, only deals that resulted in the start of operations prior to 2001 were included. Hence, if a deal was approved by MEGA in 2000, but operations did not begin until 2003, that case was excluded from the study.

Graphic 16: Shift-Share Analysis of Manufacturing Employment Changes From 2001 to 2007 With the State of Michigan as the Region of Comparison 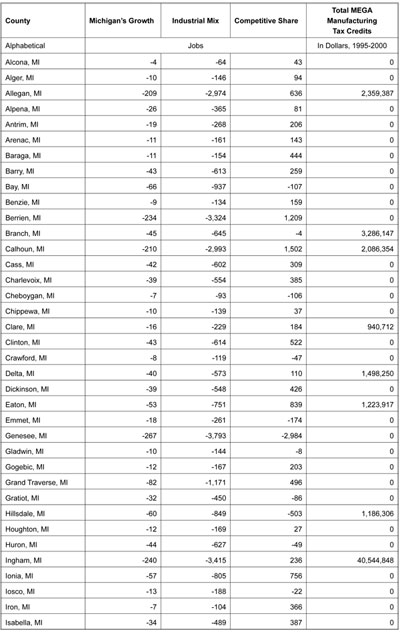 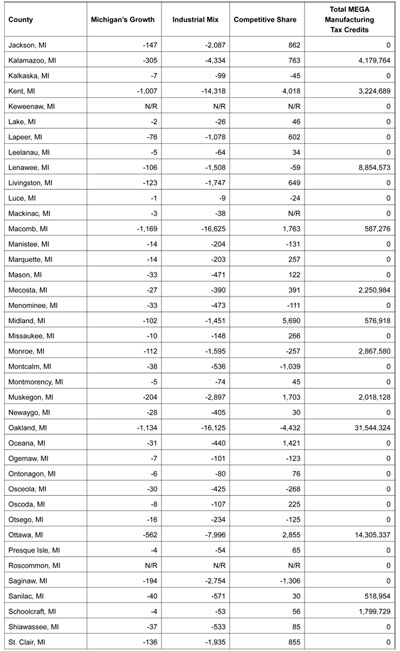 Source: U.S. Bureau of Labor Statistics, Michigan Economic Growth Authority, and calculations by Michael Hicks. The MEGA tax credit data was filtered to separate manufacturing facilities from nonmanufacturing facilities. The MEDC included Standard Industrial Classification codes for most credits, and only the manufacturing SIC codes were included. There were seven instances where SIC codes were absent. In these cases, the credits were sorted by scanning the credit's Briefing Memo for a description of the facility. Only facilities primarily engaged in the creation of goods were included, meaning that some companies with SIC manufacturing codes were excluded.

A scatter plot of this relationship is telling. In Graphic 17, county-level changes in manufacturing employment attributable to county-specific conditions appear on the vertical axis, while the total MEGA credits from 1995 through 2000 appear on the horizontal axis. There is no clear linkage between the two, and the fact that the statistical relationship is negative strongly discounts the argument that the MEGA program is improving employment in manufacturing. 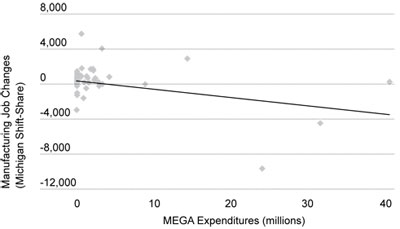 To check that the county competitive shares were representative of changes unique to the counties themselves, rather than an accidental product of the choice of the state of Michigan as the region of comparison, we recalculated the shift-share analysis using the United States as the region.

The results of that analysis appear in Graphic 19.

Graphic 19: Shift-Share Analysis of Manufacturing Employment Changes From 2001 to 2007 With the Nation as the Region of Comparison 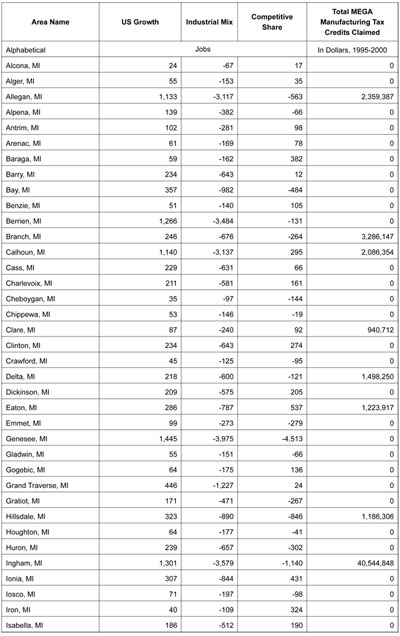 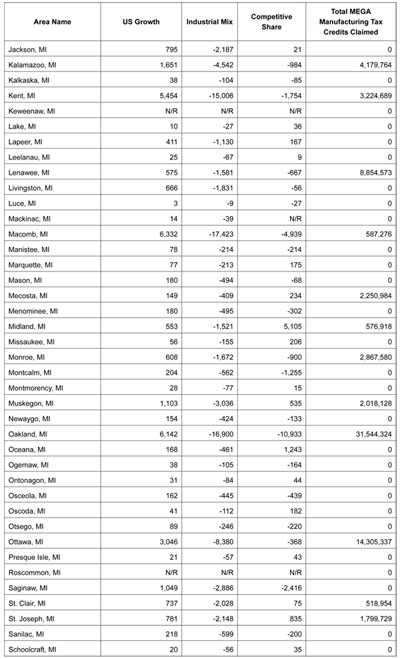 Graphic 20 shows a scatter plot of the relationship between the county's "competitive share" from 2001 through 2007 with the nation as the region and the claimed MEGA manufacturing credits in the years 1995 through 2000. Note that the negative relationship is roughly the same, indicating that the earlier analysis of the county competitive share was not an artificial result of using the state of Michigan as the region for comparison.

In this case, the 50-job increase in County X's manufacturing sector was pretty good, since 20 of the jobs, or 40 percent, are due to purely local trends that were independent of statewide employment and manufacturing growth.