This vision inevitably came with a price. Since fiscal 2001, the earliest year for which information is readily available, the Michigan Legislature has appropriated more than $394 million15 in general fund monies to the MEDC. The general fund portion of the budget is that area over which legislators have the most appropriations discretion. This figure thus excludes other types of appropriation.

For instance, since fiscal year 2001, more than $823,00016 has been budgeted for MEDC operations through "IDG," or "interdepartmental grants." This category simply records financial transfers from other state departments, such as money from the Michigan Department of Environmental Quality to pay for a clean air ombudsman.

The federal government has passed down $516 million[17] in financial support during the same time period. Federal monies fully fund the Community Development Block Grant program, which is meant to help low- and middle-income communities with a wide variety of community improvement projects. In Michigan, the CDBG program is frequently employed to supplement economic development deals by the state in association with the Michigan Economic Growth Authority (discussed in detail later).

The MEDC may have also been the recipient of more than $6.8 million in local and private resources since 2001.[18] Private revenues may be generated from fees collected for a conference held by the MEDC, for instance.

The corporation has also received appropriations of another $734 million in state "restricted" funds.[19] These represent monies appropriated by the Legislature for a specific program, such as the 21st Century Jobs Fund, which involves a wide-ranging assortment of economic development initiatives.

Notice in Graphic 1 and Graphic 2 that fiscal year 2006 shows a major spike in the amount of money appropriated for use by the MEDC. The vast majority of this increase in revenues is a direct function of the state selling off a portion of its expected future revenue from major tobacco companies at a significant discount.

The revenues from tobacco companies were the result of a "Master Settlement Agreement." This 1998 agreement, struck between U.S. states and major tobacco companies, promised more than $206 billion in new revenues over 25 years to states participating in the agreement.[20] The agreement was made to prevent ongoing lawsuits by state governments against the tobacco industry for health care costs allegedly associated with tobacco use.

Michigan has received more than $200 million annually from the agreement since 2000,[21] but the state chose to sell a portion of its future tobacco settlement revenue stream at a discount in exchange for acquiring a large amount of the money earlier.[*] Total state restricted funds appropriated in fiscal year 2006 alone eclipsed $400 million[22] as a result of the discounted revenue sale.[23]

According to the Michigan Senate Fiscal Agency, gross appropriations to the MEDC have totaled more than $1.6 billion since its inception.[24] Graphic 1 summarizes the figures discussed so far.

Graphic 1: Appropriations to the MEDC/Michigan Strategic Fund Since Fiscal 2001

The totals in Graphic 1 do not include "corporate" donations that escape the traditional appropriations process. The revenues generated by the state's Indian gaming compacts flow directly to the MSF[25] and are then passed on to the MEDC.[26] Such contributions have totaled $119 million since calendar year 2000.[27]

As this document is being prepared for publication, the state House and Senate have each passed their own versions of an MEDC budget for fiscal 2010. The state House appropriated a total of $147 million[28] for operation of the MEDC, and the state Senate more than $119 million.[29] Whatever the final appropriations figure, it seems likely that total monies appropriated to the MEDC since fiscal 2001 will reach at least $1.75 billion. 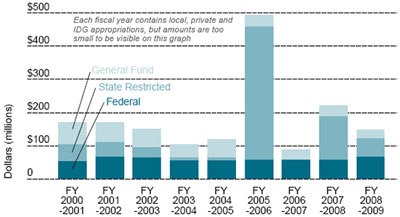 [*] This arrangement is arguably a form of deficit financing that violates the Michigan Constitution's balanced budget requirement. See Jack McHugh, "Eight Is a Start: Where Gov. Granholm's Budget Recommendations and the Mackinac Center's Agree," (Mackinac Center for Public Policy, 2009), 2, https://www.mackinac.org/archives/2009/s2009-03.pdf.