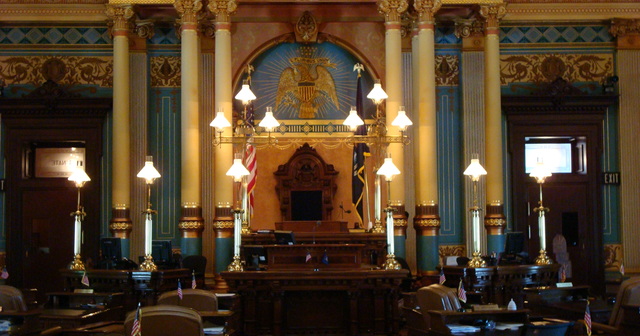 Senate introduces some important proposals on day one of 2017 session

The first 50 bills introduced in the Michigan Senate this year contain many proposals dealing with criminal justice.

These are the latest iterations of ideas that have been hotly debated in Lansing for several years. All of the following bills also appeared within a bundle of 2016 Senate proposals that occupied lawmakers and lobbyists well into December.

They didn’t pass, but they’re already on the table for this year. Several of them echo last year’s focus on data collection.

Three bills define the word “recidivism” as it is used in various places in Michigan’s law books. They also make a distinction between some violations of parole and probation — “technical” violations — and others and then describe how data about the former violations should be gathered.

A “technical” parole or probation violator is someone who hasn’t committed a new crime but has broken some rule of his parole or probation. Fully one-third of the people committed to Michigan prisons are there for technical violations, costing the state $160 million between 2008 and 2012.

Another proposal is the Parole Sanction Certainty Act. It would create a new parole system based on the same principles as a successful new probation system Michigan courts have implemented in many parts of the state over the last couple years. The idea is to build accountability by immediately punishing rule-breaking with short jail stays, reinforcing an attitude of discipline and a commitment to productive re-entry.

The Michigan House is expected to take up criminal justice reforms of its own, including presumptive parole. House Speaker Tom Leonard has also identified prison mental illness as a priority.