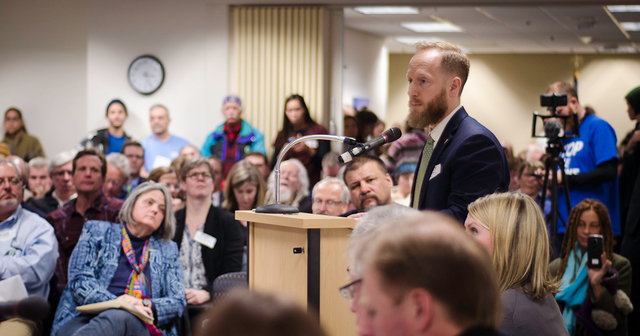 The Value of Pipelines (and Line 5) to Michigan

Testimony from the Michigan Pipeline Safety Advisory Board

Editor’s note: This is an edited version of remarks prepared for the Michigan Pipeline Safety Advisory Board.

I would like to thank the Michigan Pipeline Safety Advisory Board, and co-chairs Valerie Brader and Heidi Grether for the opportunity to comment.

My name is Jason Hayes. I am the director of environmental policy at the Mackinac Center for Public Policy.

You have heard comments discussing potential dangers associated with transferring liquid fuels through the Straits of Mackinac. I cannot disagree with people when they argue that we face risks as a result of our energy choices, nor do I fault them for their desire to protect our natural environment.

I can, however, question the improper characterization of those who support the provision of reliable, affordable energy as not caring about environmental protection. No one looks forward to the environmental disruptions and harm to human well-being that would be caused by a pipeline rupture.

I can also question policy solutions like “leave it in the ground,” or “shut down Line 5.” Neither are realistic or credible options, given our state’s current technologies and energy needs and our desire to reduce overall environmental impacts and to improve human life.

There are many reasons to carefully maintain and continue using the Line 5 pipeline. I will list four in this public comment.

First, as a Michigan Department of Environmental Quality spokesperson noted in an October 2015, MLive.com article, "It's easy for an environmental group to call for (Line 5) to be shut down based on the existence of an indeterminable future threat to the environment," but it is a "heck of a lot more complex."

The article explains that to legally shut down the pipeline, the state would need a court order showing clear violations of state law or the 1953 easement. It would also need to show an "imminent threat" of pipeline failure. In the same article, the Pipeline and Hazardous Materials Safety Administration stated that the life of a properly constructed and maintained pipeline is “virtually endless.”

Dr. Edward Timm’s recent paper discusses potential structural integrity issues arising from strong water currents in the Straits and early pipe handling techniques. This paper also recognizes the immediate closure may be “judged to be too extreme based on economic concerns,” and recommends increased inspections and “real-time monitoring of weather events and currents in the most vulnerable areas of the pipeline.”

Second, the use of all energy resources has inherent risks. But, the benefits of using liquid fuels clearly outweigh the harms, and transporting those fuels by pipeline is safer than other comparable options. A 2013 Manhattan Institute study showed that road transportation has a twenty times higher incidence rate and rail transportation has double the rate of incidents of pipelines.

The Association of Oil Pipeline reports that today, 99.999 percent of all petroleum products transferred by pipeline arrive at their destination safely. This is no small feat when one considers that there are over 9,700 miles of pipelines in the state of Michigan, and 2.6 million miles of pipelines across the United States.

Additionally, vice president of U.S. operations at Enbridge, Brad Shamla, noted in a January 2016 MLive article that the state of Michigan requested that Line 5 be built, in part “to eliminate tanker traffic on the Great Lakes.”

Third, natural gas and oil are energy dense and affordable fuels that help maintain Michigan’s economy and our quality of life. For over six decades, Line 5 has carried natural gas liquids and light crude oil to this state. Refineries in the Detroit area refine 30 percent of the crude oil transferred by the pipeline. Over 80 million barrels of Michigan-produced crude have been transported in Line 5 since 1999. In 2014, Enbridge’s four other pipelines, together with Line 5, benefited Michigan’s economy by paying over $22 million in taxes.

Fourth, the Environmental Protection Agency (EPA) just released its “Draft Inventory of U.S. Greenhouse Gas Emissions and Sinks: 1990 – 2015,” which indicates that “Overall, net emissions (of GHGs) in 2015 were 11.2 percent below 2005 levels,” a larger reduction than any other major industrialized nation. The report explains that a key reason for the decrease is fuel switching from coal to natural gas.

Michigan’s two major electric utilities – DTE and Consumers Energy – are in the midst of a multiyear plan to “retire (their) coal fleet.” Additionally, Consumers Energy has opted to cease purchasing power from the Palisades nuclear plant.

Recognizing that both utilities are switching a majority of their generation capacity to natural gas, it will not be possible to maintain reliable and affordable electricity generation in Michigan without an abundant supply of natural gas.

Petroleum fuels are essential to improving Michiganders’ quality of life and our economy. They also play an important role in improving our health and bettering our environmental quality. For that reason, I believe it is essential to continue the operation of Line 5. I also believe that a hypervigilant maintenance and monitoring schedule be maintained on Line 5 to protect critical environmental values and water quality.

Thank once again to co-chairs Brader and Grether and the Michigan Pipeline Safety Advisory Board for the opportunity to comment.