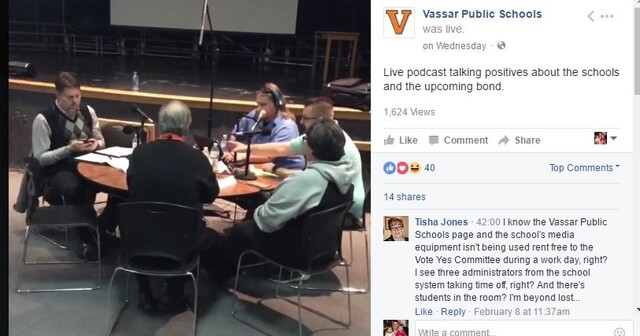 Politicking on the taxpayer dime

During school hours, in front of students, Vassar Public Schools held an event which explicitly advocated for a school millage request. A panel that featured a private citizen and a group of administrators was videotaped and put up on the district’s Facebook page.

The high school brought in the host of the local Cass River Radio Podcast for a 45-minute discussion with the district’s superintendent, high school principal, alternative education principal, community family liaison and technology director. During the talk, the panel did the following:

(Editor's note: The district removed the video. We saved it from the school's page and re-uploaded it below.)

Though the Podcast was done by a private member of the community, which is allowed under campaign finance law, bringing it into the school and promoting the yes2Vassar website may have constituted a campaign violation according to the Michigan Bureau of Elections website. According to the website’s Campaign Finance page, “Section 57 of the Michigan Campaign Finance Act (MCFA) stipulates a public body or person acting for a public body must not use or authorize the use of public funds or resources to make a contribution or expenditure to further the nomination or election of a candidate or the qualification, passage or defeat of a ballot question. The inclusion of Section 57 in the MCFA does not restrict the constitutionally protected right to associate or to engage in political speech. It is intended to prevent those who control public resources from using those resources to influence the outcome of an election. It is up to the people and not public bodies to decide elections.”

Reporting from Jones also noted a get-together during the school day at the local library in which school staff were provided with food paid for by the construction company which would benefit from dollars raised through the bond. The staff worked on assignments on how to pass the bond.

I was quoted for the story:

In my view, this is a clear example of a public entity politicking with taxpayer money. While government entities are allowed to provide information about tax requests, they are not allowed to 'express advocacy' one way or the other on the issue. Vassar Schools hosted an event during the school day with public funds which directed people to websites advocating for a 'Vote Yes' position and used only positive language to present strictly the perceived benefits of the bond, rather than a fair presentation of the issues. Sadly, this is just one of many examples of school districts across Michigan that do the same.