While there were important laws passed in the statehouse in 2019, what didn’t get passed was just as noteworthy. There was no large tax increase, despite it being governor’s highest priority. There was less road funding in the budget, despite a consensus between legislators and the governor that that the state ought to spend more on road repairs. This was also a light year for business subsidies, and our business subsidy scorecard — which records legislators’ votes on such matters — contains only one small addition.

Since 2001, we’ve kept track of every law which authorizes new business subsidies, and, where available, official estimates of how much was authorized. We have counted only those programs which transfer money from some taxpayers to others, and omitted votes where the programs were only a small portion of the overall legislation. In budget bills, for example, the subsidies represent a minuscule fraction of the authorized spending, so they’re not on the scorecard.

There have been business subsidies authorized in the state budget each year, though they were a small amount in 2019. Legislators reduced some corporate welfare spending, and the governor vetoed some spending on top of that.

Excluding federal funds and subsidy money that was authorized for the 21st Century Jobs Fund, which were already included in the scorecard, the $59 million for new business subsidies is less than half of what was authorized last fiscal year. The law authorizing the new spending is not included in the scorecard, however, because the subsidies are part of a bill which authorized a further $4.1 billion in spending, making the votes on it an improper reflection of lawmakers’ sympathies to business subsidies.

There was another approved bill which is included in the business subsidy scorecard. The state stopped offering new selective refundable tax credits in 2012 as part of its change in business tax laws. The state allowed companies with deals to keep collecting their credits under the older business tax law. One of those businesses got bought out by a company paying the newer tax, and that company would have had to stop collecting the credits for the business it acquired. Lawmakers voted to let the company keep collecting a maximum of $12 million in tax credits. The bill was approved with few dissenting votes. Even lawmakers who have been generally skeptical of business subsidies decided to give this one a pass.

While state fiscal analysts reported that company officials expected to collect just $4 million to $5 million in remaining credits, they have been authorized to receive more. And what any company collects is considered confidential by the state, which is a travesty of basic government transparency and ought to be changed. 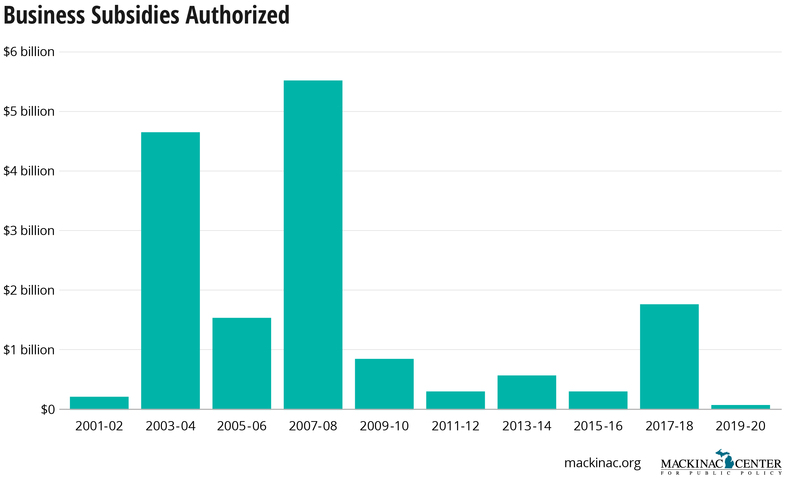 The few approvals for new business subsidies underrepresent the newfound skepticism among lawmakers for business subsidies. They abstained from extending a program which expired at the end of the year, the questionably named “Good Jobs for Michigan” program. It subsidizes companies selected by state administrators and was given $200 million and two years to operate when lawmakers created it in 2017. Administrators blew through its budget in that time in 6 projects, with most of it being offered to Fiat-Chrysler’s project to update its plants.

The last time that Michigan had a Democratic governor and a Republican legislature, all that they seemed to be able to agree upon was that the state should offer more business subsidies. New programs were welcomed with overwhelming bipartisan support. This has changed.

Part of it may be due to the economy — the state is no longer going through a single-state recession — and another part may be that the current lawmakers are different from those who served in the past. Or maybe the public has grown more skeptical of business subsidy programs, and therefore their representatives have started to doubt them as well.

Either way, the Overton Window has shifted on the issue, and the shift is visible in our business subsidy scorecard.