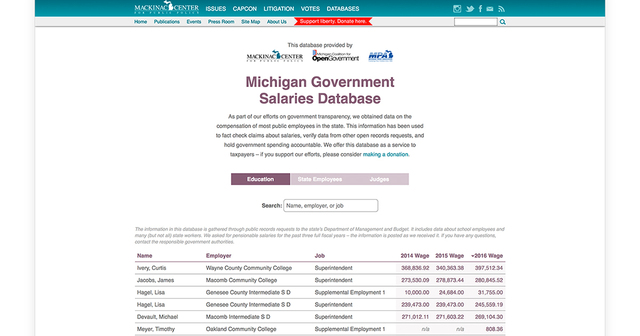 Visit the database at mackinac.org/salaries
Blog

The value of government transparency and the need for more of it has been on full display since the Mackinac Center and two other watchdog groups released the Michigan Government Salaries Database in late March.

The new database — which is easily searchable and made available as a public service by the Mackinac Center for Public Policy, Michigan Coalition for Open Government and Michigan Press Association — contains salary information of nearly 300,000 public employees.

“As part of our government transparency project, the Mackinac Center often obtains data on the compensation of government employees in Michigan,” Michael Reitz, Mackinac Center executive vice president, was quoted by My Bay City as saying. “We use these public records to fact-check claims about salaries, verify data from other open records requests and hold governments accountable for their spending. We and our partners now offer this database as a service to taxpayers and other watchdogs.”

While not the first online database of public employee salaries in Michigan, the new database is the most extensive one and makes it easy for people to access public records.

“This database can provide information on whether there are disparities based on gender, race, ethnicity, etc.,” Jane Briggs-Bunting, founding president of the Coalition for Open Government, was quoted in the Lansing State Journal as saying.

Lansing State Journal columnist Judy Putnam said publishing public employee salaries — something the LSJ once did — may upset some people, but transparency is justified.

“The bottom line is that public salaries should be available in a transparent way. Why? Because the employer of public workers is us, the citizens,” Putnam wrote.

She listed some of the common arguments against a database and explained why, despite them, the salaries should remain public.

The Leelanau Enterprise interviewed a county administrator who said he doesn’t mind efforts to publish such information.

The new database is not considered a threat by county administrator Chet Janik, who served previously in education positions that would have put him on the list.

“I don’t have an issue,” Janik said. “When I worked at NMC (Northwestern Michigan College), Buckley and Charlevoix Schools, my salary was public. “The positions are supported by tax dollars. So, I have no problem with the access,” he said.

“I like to get it from a source like the Mackinac Center that has a reputation for credibility, rather than from another organization without credibility. It’s more reliable,” local government watchdog Steve Mikowski told The Leelanau Enterprise.

Through the database, citizen watchdogs identified errors in the posted salaries of some Department of Corrections employees. In some cases, employees were listed as receiving hundreds of thousands of dollars more than they do in reality. The error was made by the state’s Office of Retirement Services, which is responsible for managing the pensions of Michigan’s public employees.

“One must now question if this FOIA response is the only thing ORS is doing in error,” Reitz said. “Has the office based retirement calculations on these erroneous and inflated salaries? How long has ORS had bad salary data? Why didn’t anyone within the office question why a Department of Corrections employee was supposedly paid $400,000? Legislators should conduct a thorough review of this office and its record keeping procedures and demand answers.”

Investigative reporter David Bailey, of WZZM 13 in Grand Rapids, asked the state if the inflated numbers were used to calculate pensions. The ORS said they were not, adding, “Thorough reviews of record keeping is already part of the ongoing auditing process that occurs, through both internal and external audits.”

Bailey noted a new report by the Michigan Office of the Auditor General that found ORS understated pension liabilities by $143 million in 2014-15 because it lacks a control process to ensure correct data.

The state provided the Mackinac Center new salary numbers for the 4,500 employees in question, but that new data set was also flawed. A third set of salaries, which is apparently correct, has been posted to the database.

As the Center obtains additional records through the Freedom of Information Act process, more government employees will be added to the database.

“Our database made it more easily available, while uncovering potentially serious administrative issues in an important government office,” Mackinac Center President Joseph Lehman explained. “One of the Mackinac Center’s signature contributions to policy discourse in its 30-year history has been making public data more accessible to everyone, not just politicians and bureaucrats. We will continue to fight for an open, transparent government.”