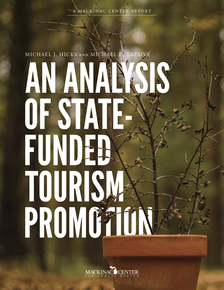 You can read our study on state tourism promotion here.

On Wednesday, Feb. 1, a bipartisan group of some 70 state House members announced that they would support a package of bills to reform Michigan’s Freedom of Information Act. That could mean more transparency for taxpayers and voters. That is good news. But there is more to be done, and lawmakers should start by opening up the Michigan Economic Development Corporation to more sunshine.

The MEDC is the state’s department of corporate welfare. It takes hundreds of millions of hard-earned dollars from millions of Michigan taxpayers each year and bestows favors on a few select companies. It also spends tens of millions supporting its own expensive bureaucracy.

The failure of MEDC programs to create and maintain new jobs for the state can be proved, which perhaps explains the department’s desire to keep its records secret. MEDC officials routinely stymie research and reporting by thwarting requests for information. As I’ve recommended before, the MEDC should be shut down in its entirety, but short of that, it should at a minimum provide more information to the public about how it spends their tax dollars.

The MEDC employs a dark methodology when it comes to analyzing its programs. Unsurprisingly, the agency purchases (or creates) analyses showing that its programs are remarkably successful. Its officials boast that both the Pure Michigan and Michigan Business Development Program are effective and roll out numbers to support that claim. But they don’t disclose how they arrived at those figures.

For the state’s $34 million tourism advertising campaign known as Pure Michigan, the MEDC long ago selected a contractor to estimate its return on spending. That contractor — Longwoods International — was selected on the apparent assumption that it would show positive returns from the program. It did, and the claims have steadily increased every year for the past nine. For 2015, Longwoods claimed that Pure Michigan produced a credulity-straining $7.67 in state tax revenues for every dollar spent by the state on ads.

What it hasn’t shown is precisely how it calculated these figures. The contractor refuses to do so and the MEDC seems perfectly happy keeping this information from the public. In other words, Longwoods and the MEDC are essentially telling lawmakers, “Trust us; subsidizing the tourism industry is great. Now hand over more money for us to spend.” Lawmakers and taxpayers are being bamboozled. The Mackinac Center’s own study on state tourism promotion — which is 100 percent transparent — showed this spending to be largely wasteful.

The Michigan Business Development Program, a business subsidy that cost $57 million in fiscal year 2015, is likewise touted as a success by the MEDC. It says its projections from 2014 show that the program’s projects will return $8.72 for every dollar spent.

The people who make the claims for these programs use a computer program known as REMI. I requested the data they put into REMI for several deals, knowing that if important data is left out, or if garbage is put in, the results of the program will be effected. The agency refused my request. Once again, state officials want citizens to take their word for the success of their spending.

The MEDC hired a consultant in 2009 to use REMI to calculate the impact of the Michigan film incentive subsidy program. His analysis determined the program was a “big hit” and produced lots of value for the money. A quick look at the assumptions made clear, though, that he left out of his calculations every single penny of the program’s costs, making state subsidies appear free. The state wasted $500 million on this program before ending it.

The state paid out $1 billion-plus last year to companies through MEGA, a program that stopped giving new awards in 2012 and has been winding down its obligations since. This was roughly equal to all the money the state’s Corporate Income Tax brought in during 2016. As the MEDC distributes the money, it refuses to report the names of companies and amounts each received in reports. This is a travesty of basic accountability and transparency and lawmakers should quickly force the MEDC to report this regularly.

Companies that receive state money impose a burden on people. The least they should do in exchange for the favoritism they receive is to consent to basic transparency.

The House has taken some basic steps toward transparency, which is good news. More needs to be done. The MEDC should be shut down for its transparent failures, but short of that, it should be opened up to the disinfecting power of sunlight.