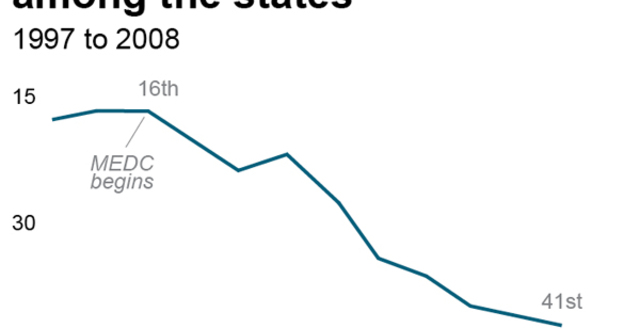 Michigan’s decade-long decline in Gross Domestic Product coincides with the creation of the Michigan Economic Development Corp. Rather than living up to its state mission to “create and retain” jobs, the bureaucracy has failed and should be eliminated.
Author’s calculations based on data from the Bureau of Economic Analysis
Publications / Viewpoints

The Michigan Economic Development Corp. was created in 1999 and charged with "providing services to create and retain good jobs and a high quality of life." The program has been a patent failure and 2009 should be the year that it is eliminated.

The MEDC's failure has been costly not just in monetary terms — last year it consumed $31 million from the state's general fund — but also for the massive distraction and excuse factory it has given to the state's elected officials. Rather than seriously reforming Michigan's awful overall business climate, lawmakers have used hundreds of press releases claiming "MEDC tax breaks create X jobs at company Y!" to delude themselves and the public into believing they were "doing something" to fix our state's broken economy.

“Economic development” mandarins like those at the MEDC can’t possibly have all the information necessary to successfully pick the winners from the losers in a way that improves the overall economy.

One hardly needs statistics to prove that they did not fix anything, but here they are anyway: New state Gross Domestic Product figures released last month reveal that in the decade since the MEDC was created, Michigan has fallen from having the 16th highest GDP to having the ninth worst (41st place) in the country. Per-capita personal income has tumbled from 16th to 34th place.

And we're number one in population loss. According to the Census Bureau, in the 12 months ending in July 2008 Michigan was one of only two states with a net decrease in population. United Van Lines moving data hints at the human cost of these figures: 67 percent of all UVL's Michigan-related traffic is outbound. There is perhaps no single better metric for summing up "quality of life" issues than the willingness of people to pack up and leave.

Given this depressing litany, it's nothing less than arrogant for MEDC apologists to keep claiming that they can centrally plan Michigan back to economic health with a selective tax break winner here and a flashy industry du jour cash subsidy there. Some examples of their predictions and comments over the years illustrate the misguided hubris:

The unemployment rate flirted with the 7 percent level in both 2004 and 2005. It steadily worsened and today stands at 14.1 percent, highest in the country.

The marketplace had other ideas. Plastech closed its doors in 2008.

The explanations for why this "mercantilist" policy of picking winners and losers is doomed to fail are hardly new. To cite an early example, in 1698 English economist Charles Davenant explained, "It is hard to trace all the circuits of trade, to find its hidden recesses, to discover its original springs and motions, and to shew [show] what mutual dependence all traffics have one upon the other. And yet, whoever will categorically pronounce that we get or lose by any business, must know all this, and besides, have a very deep insight into many other things."

In other words, no matter how well intentioned and funded - and no matter how boisterous their predictions and claims to the contrary — "economic development" mandarins like those at the MEDC can't possibly have all the information necessary to successfully pick the winners from the losers in a way that improves the overall economy.

Michigan should terminate its experiment in central planning, and the politicians who have hidden their failure behind press releases should finally get serious about removing the regulatory, tax and labor law obstacles that prevent Michigan from returning to economic health.