How to Help Those with a Criminal Record Find Work 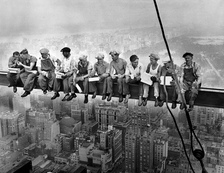 In Michigan alone, about 4 million people have some type of criminal record and 50,000 more people are convicted of a felony every year. Another 10,000 are released from prison each year back into our communities.

A state’s criminal justice system is driven in large part by the laws on its books and how it polices its citizens to enforce those laws. But it’s also important to consider how state policies affect how those people are treated after they pay the penalty for their crimes. Mike Jandernoa is the former CEO and board chair of Perrigo, a pharmaceutical company in West Michigan. In a recent essay for Fox News, he made a strong case for “Why hiring people with criminal records benefits us all.”

First, opening up opportunities to this population will make our country safer. Right now, almost 60 percent of individuals remain unemployed a year after being released from incarceration. It’s in our collective self-interest for them to get jobs, because steady employment is one of the best ways to ensure that individuals lead productive, crime-free lives. In one study of 6,000 returning citizens, employment cut the rate of those who committed a new crime in half.

Second, employers all across the country are suffering from a dearth of skilled labor. Every year, one major national bank surveys small businesses across this country. This year the survey found incredible optimism: 80 percent of employers said their business is stronger than ever; 40 percent said they plan to make a capital expenditure to grow their companies; and a quarter of those surveyed said they plan to hire more workers.

While Jandernoa mostly speaks from his experience as a businessman and discusses private sector solutions, the government also has a role.

Reforms to seal or erase records of criminal convictions are also a priority for job creators. These policies seal minor criminal records after a certain crime-free period. Research shows that low-level offenders who have remained crime-free for three to five years are no more likely to commit a crime than anyone else. …

Occupational licensing reform is another issue important to the business community. Today one in four occupations requires a government license – but a criminal history often bars an individual from the licensing process. Ironically, such restrictions make us less safe. One study showed that states with more burdensome licensing laws saw an average 9 percent increase in recidivism, while those with the lowest burdens had a recidivism reduction of 2.5 percent.

It’s great news that private sector employers are leading the way in giving people a second chance. Michigan’s government should do so as well. This means allowing hospitals to hire people even if they have a criminal record and enabling contractors to work in their field.

There are three clear ways that good criminal justice policy can result in targeted workforce development wins. By eliminating unnecessary crimes, re-evaluating arbitrary punishments and repealing laws that prevent ex-convicts from finding work, we can ensure that our government is not unfairly punishing employers and job-seeking former offenders. Other states have done this, making government more efficient and the economy more robust — with no cost to public safety. It’s a new year and time for the Legislature to get to work on these issues so that more Michiganders can go to work, too.