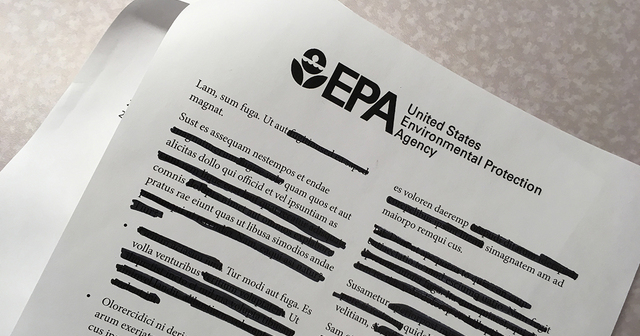 Rep. Smith explained why the HONEST Act was introduced. “An open and honest scientific process is long overdue at EPA. American taxpayers have often had to foot the bill for regulations and rules based on hidden science that has not been available for review by the public. … This bill would prohibit any future regulations from taking effect unless the underlying scientific data is public.”

He also defended the Science Advisory Board Reform Act of 2017. “The SAB at EPA,” he said, “has the opportunity to include a more balanced group of scientists to assist EPA in fulfilling its core mission.” He added, “This bill would ensure that scientists advising EPA on regulatory decisions are not the same scientists receiving EPA grants.”

The Office of Science Advisor within the EPA says, “Science is the backbone of EPA's decision-making. The Agency's ability to pursue its mission to protect human health and the environment depends upon the integrity of the science on which it relies.”

The OSA continues by describing the importance of scientific integrity, using words like objectivity, clarity, and reproducibility. It also notes that scientific integrity “helps to build public support” as “people are more likely to support the Agency if they can trust the quality and integrity of the work.”

On those matters, I’m confident that most people would agree. The public should expect federal agencies to use credible, reproducible, and transparent science to support their regulatory efforts.

As President Reagan noted, though, we can trust, but should still verify, and the average person should not be viewed as unreasonable for asking “Why?” when faced with new, life-changing regulations. “Just trust us” is not good enough when regulations will affect the availability or expense of energy, cost people their jobs or raise prices and restrict access to essential goods and services.

Of course, this isn’t the first effort by Congress to impose transparency on the EPA. The Secret Science Reform Act of 2014 and 2015 both attempted to address this issue. However, some in the Senate attacked the bills as laughable and even insane. President Obama promised to veto the bills if they ever made it to his desk.

Smith says, though, that the EPA has not lived up to its stated commitment to scientific integrity. Others agree; the agency has faced a growing chorus of critics who say it is not transparent and uses questionable practices when it appoints scientists to its advisory board.

For example, the Energy and Environment Legal Institute has worked for years, using Freedom of Information Act requests and lawsuits, to force transparency on the agency.

The institute’s work has revealed, among other things, that EPA Administrator Lisa Jackson had secret email accounts. Additionally, EPA staffers were found to have used personal email accounts, apparently to avoid federal requirements for preserving and reporting data. The institute also found out about a string of secret meetings and communications between senior EPA officials and environmental groups carried on while the agency was preparing energy-focused regulations.

The Senate Environment and Public Works (EPW) Committee also experienced difficulties when dealing with the EPA. In April 2016, Sen. Jim Inhofe, a Republican from Oklahoma who chaired the committee, sent a letter to EPA Administrator Gina McCarthy describing a strained, multi-year interaction between the EPA and the committee. He noted serious “concerns the agency is not committed to a transparent or meaningful public input process” for selecting members of the advisory board.

Transparency in this area is absolutely essential as the board is the primary means of peer review for the EPA’s science. However, the Congressional Research Service has shown that, in 2014, board members had received substantial EPA-funded research grants. Those grants raise the obvious question: To what degree (if at all) has the presence of a substantial funding relationship affected the peer review decisions of the agency’s advisory board?

The Mackinac Center for Public Policy has a consistent track record of calling for transparency from all levels of government and publicly funded organizations. This case is no different.

Some will bemoan demands for transparency in EPA science and peer-review processes as a partisan attempt to hinder the agency. But the reality is that open, public access to the science underlying regulation — the science that affects everyone’s lives and the science we have all paid for — should be a basic, first principle. Furthermore, we should be able to expect that the peer review process EPA regulators tell us is trustworthy is not carried out by scientists who also rely on the agency for funding.

These expectations are eminently reasonable. In fact, they should be science 101.