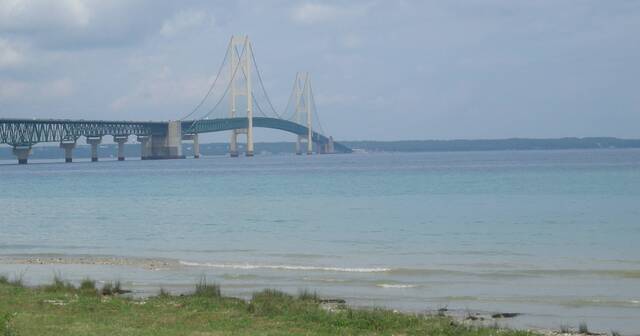 Gov. Gretchen Whitmer demonstrated the skill of a long-serving politician Tuesday while pettifogging her role in the Line 5 stalemate.

“There has been no change to Line 5,” Whitmer said during her debate with challenger Tudor Dixon. “No change.”

This is precisely true. The necessary, long-delayed environmental improvements to Line 5 remain on hold. The governor’s quixotic campaign to shut down the pipeline is also stalled, facing opposition from federal, state and provincial authorities on both sides of the border and having lost two key rounds in federal court. Nor has the regime uncertainty over the future of the international pipeline improved during Whitmer’s tenure.

While the governor is deeply involved in the Line 5 quagmire, her role in it has been entirely negative. The reason there isn’t any change is that Whitmer has so far failed in her effort to shut the line down.

The Line 5 pipeline moves 540,000 barrels daily of light crude oil and natural gas liquids to refineries in Canada and the Midwest. Originating in Superior, Wisconsin, the pipeline enters Michigan through the upper peninsula, continues through the Straits of Mackinac, has a major nexus in Bay City, and exits the state near Port Huron. It has been in operation since 1953 and is run by the Calgary, Alberta-based pipeline company Enbridge.

Whitmer campaigned on a platform to shut the pipeline down, as did Attorney General Dana Nessel. Though anti-Line 5 activists have various complaints, the most common is the risk of an oil leak in the Great Lakes. After taking office Whitmer revoked Enbridge’s easement, the contract allowing the company to operate the pipeline on state land, and ordered all operations to cease by May 2021.

Enbridge understandably fought that effort. So did the governments of the United States and Canada. Enbridge filed a federal court action, arguing that the state has no jurisdiction over an international conduit that is governed by the 1977 Transit Pipeline Treaty.

The company also refused to cease operations unless ordered to do so by a court. Neither state nor federal courts have ordered Enbridge to cease operations, and Nessel’s case against the company has already lost twice in U.S. District Court. As of this writing, the pipeline continues to provide needed fuel to frosty Canadians and shivering Michiganders.

This is the precise truth in Whitmer’s claim. There has been no change to Line 5 – because her own meritless legal case has failed to convince federal courts that the state has jurisdiction, or that Enbridge has done anything wrong.

One irony of Whitmer and Nessel’s campaign against affordable energy is that the governor and the A.G. have drawn enemies from their own party and the cognate party up north. While the Biden administration has sent confusing signals on the matter, its current position is that Line 5 is not to be closed.

The Trudeau government has been more forceful, filing an amicus brief on behalf of Line 5 in May 2021 and later invoking the 1977 treaty, which precludes either country from unilaterally closing down pipelines involved with the transport of hydrocarbons.

“Line 5 is essential to our energy security,” Minister of Natural Resources Seamus O’Regan said last year. “The Government of Canada has continuously advocated for and raised the importance of Line 5... Line 5 does not just affect one province or one region — it supports our entire country.”

A more bitter irony is that Whitmer’s anti-Line 5 obsession, though ostensibly motivated by concern for the environment, is standing in the way of long-planned environmental upgrades that would virtually eliminate any risk to the Great Lakes.

Right now, Line 5 consists of dual 20-inch pipes that run through the water of the strait itself. Enbridge committed in 2018 to paying for a project to move the pipes out of the water, into a secure concrete-lined tunnel 100 feet below the lake bed. That improvement remains on hold because of the legal fight with Michigan’s government. Whitmer and Nessel have both claimed the pipeline poses an unacceptable risk to the waters of the Great Lakes. Yet they are standing in the way of an effort that would ensure the safety of the lakes, even though they have no serious alternative plan for delivering the necessary energy.

Fortunately for the governor, who faces a tight election November 8, she has lost every battle in her war on Line 5. Energy costs are spiking in Michigan, and closure of the pipeline would have made a bad situation far worse.

Unfortunately, that war has also left the future of the pipeline in doubt, prevented environmental upgrades, and incited a low-level international incident.

For Whitmer to claim credit for the lack of change in Line 5’s status is impressively shameless. But the performance would be more convincing if the governor would commit to Line 5’s future and stop standing in the way of improvements. Sometimes the people of Michigan do need a change.