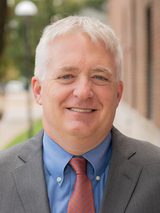 Patrick Wright is Vice President for Legal Affairs at the Mackinac Center for Public Policy, where he directs the Mackinac Center Legal Foundation. He joined the Center in June 2005 after serving for three years as a Michigan Supreme Court commissioner, a post in which he made recommendations to the court concerning which state appeals court cases it should hear.

Prior to that, Wright spent four years as an assistant attorney general for the State of Michigan, where he gained significant litigation and appellate advocacy experience. He joined the state Attorney General’s Office after one year as a policy advisor in the Senate Majority Policy Office of the Michigan Senate. Wright also spent two years as a law clerk to Hon. H. Russell Holland, a United States district court judge in Alaska.

Wright received his law degree at George Washington University in Washington, D.C. He graduated with honors in 1994. He received his undergraduate degree in political science from the University of Michigan in 1990.

Aside from directly representing clients, Wright has filed numerous amicus briefs, including many to the United States Supreme Court. In 2018, the Supreme Court cited his brief on behalf of the Center in the Janus v. AFSCME decision. In addition to being featured in many state publications, he has been published nationally in The Wall Street Journal, The Washington Post, and The Hill. He has appeared on the Sean Hannity Show and was interviewed by Shepard Smith on Fox News.

Wright lives in Midland, Mich., with his wife and sons.

On the Case: Right-to-Work

Prop 2 Supporters Misled on Other States

A Welcome First Step in Holland