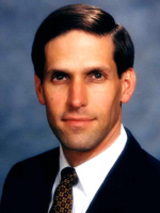 The late Joseph Overton was senior vice president of the Mackinac Center for Public Policy at the time of his passing in 2003. Overton played a key role in establishing the Center as a growing, productive and influential think tank through his direction of its research projects, staff operations and strategic planning. He also authored a variety of Center studies and commentaries. His model of public policy change, posthumously named the "Overton Window," has gained national currency following his passing.

His tremendous contributions to the Mackinac Center and the free-market movement ended with his untimely death on June 30, 2003, in an ultralight airplane crash.

Overton had a bachelor of science degree in electrical engineering from Michigan Technological University and a juris doctor from the Thomas M. Cooley Law School. He was a member of the State Bar of Michigan and was appointed by Gov. John Engler to the Michigan Appellate Defender Commission upon recommendation by the Michigan Supreme Court.

Before joining the Mackinac Center, Overton held a variety of positions at The Dow Chemical Company, including electrical engineer, project manager, and quality specialist.

Personal Tributes from Around the Nation and the World

An Inside Look at the Government-School Mentality

Mr. Smith Is in Washington

A Tax Credit Is Not a Voucher!

Changing Michigan's Constitution: An Idea Whose Time has Come

Should Michigan Become a Right-to-Work State?

"Discrimination" at Private Clubs in Michigan

The Other Educational Choice

Send the Cash, Keep the Change

A Closer Look at Proposals A and C

New "Civil Rights" for the Handicapped