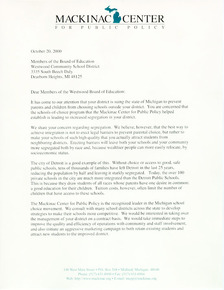 Members of the Board of Education

Dear Members of the Westwood Board of Education:

It has come to our attention that your district is suing the state of Michigan to prevent parents and children from choosing schools outside your district.  You are concerned that the schools-of-choice program that the Mackinac Center for Public Policy helped establish is leading to increased segregation in your district. 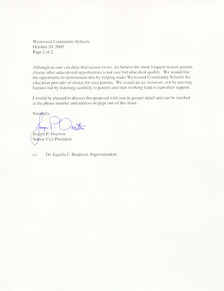 We share your concern regarding segregation.  We believe, however, that the best way to achieve integration is not to erect legal barriers to prevent parental choice, but rather to make your schools of such high quality that you actually attract students from neighboring districts.  Erecting barriers will leave both your schools and your community more segregated both by race and, because wealthier people can more easily relocate, by socioeconomic status.

The city of Detroit is a good example of this.  Without choice or access to good, safe public schools, tens of thousands of families have left Detroit in the last 25 years, reducing the population by half and leaving it starkly segregated.   Today, the over 100 private schools in the city are much more integrated than the Detroit Public Schools.  This is because they draw students of all races whose parents have one desire in common: a good education for their children.  Tuition costs, however, often limit the number of children that have access to these schools.

The Mackinac Center for Public Policy is the recognized leader in the Michigan school choice movement.  We consult with many school districts across the state to develop strategies to make their schools more competitive.  We would be interested in taking over the management of your district on a contract basis.  We would take immediate steps to improve the quality and efficiency of operations with community and staff involvement, and also initiate an aggressive marketing campaign to both retain existing students and attract new students to the improved district.

Although no one can deny that racism exists, we believe the most frequent reason parents choose other educational opportunities is not race but education quality.  We would like the opportunity to demonstrate this by helping make Westwood Community Schools the education provider of choice for area parents.  We would do so, however, not by erecting barriers but by listening carefully to parents and then working hard to earn their support.

I would be pleasec to discuss this proposal with you in greater detail and can be reached at the phone number and address on page one of this letter.