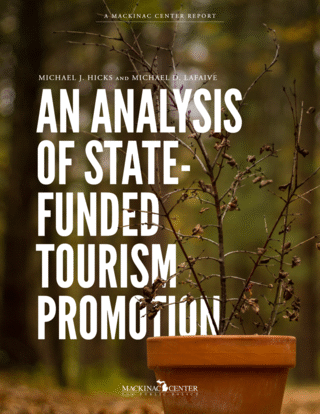 An Analysis of State-Funded Tourism Promotion

This year marks the 10th anniversary of Michigan’s tourism promotion campaign known as Pure Michigan. It was in May of 2006 when the first taxpayer-funded commercials ran featuring voiceovers by popular Michigan actor Tim Allen. Similar commercials hit national media in 2009. Over that time, the state has spent $261 million on efforts to promote the Michigan “brand” and make the state a travel destination.

No matter the popularity of these types of programs, taxpayers and policymakers should ask how effective this spending is. This money could potentially be put to more effective use that would generate better economic returns for state residents, such as for improved roads, public infrastructure or even an across-the-board reduction in Michigan’s personal income tax. The aim of this study is to assess the effectiveness of state-funded tourism promotion.