As noted in the previous section, teachers wishing to obtain licensure in the state of Michigan must pass the Michigan Test for Teacher Certification. Given some of the questions raised about the value of certification, it is important to explore whether teacher testing alone, as opposed to certification as it currently exists, might be a viable teacher quality reform.

According to Pearson Education Inc., the company which produces the MTTC through its affiliate National Evaluation Systems Inc., “The purpose of the [MTTC] tests is to ensure that each certified teacher has the necessary basic skills and content knowledge to serve in Michigan public schools.”[72] The tests are tailored specifically to Michigan state teacher preparation standards and administered by NES, an independent contractor located in Amherst, Mass. The MTTC exams are criterion-referenced, rather than norm-referenced, meaning that teacher candidates are measured against a set of standards, not against each other.

To become certified in Michigan, teacher candidates must pass two MTTC exams.[73] All teaching candidates must pass a basic skills test, which has subtests in math, reading and writing, before student teaching; some teacher preparation programs require that teacher candidates pass the basic skills test even before enrolling. Elementary school teachers (kindergarten through fifth grade) must also pass the MTTC Elementary Education test. Secondary school teachers (grades six through 12) must pass an MTTC subject area test in their chosen field of instruction, although middle school teachers (grades six through eight) must pass the MTTC Elementary Education test instead if they teach in “self-contained classrooms,” in which a single teacher teaches all subjects.[74]

More than 10 states, including Michigan, use NES tests as a part of their certification process (other states use the Praxis series of tests, which are administered by the Educational Testing Service, a competing company). Each state determines its own passing scores. Citing Ruth Mitchell and Patte Barth of the nonprofit Education Trust, Sandra Stotsky of the University of Arkansas’ Department of Education Reform has reported that over 50 percent of new teachers are licensed in states that use NES tests.[75] She has also noted, “There are no data across states on how many test items need to be correct for a passing score on each of the different tests that states require.”[76]

Not surprisingly, however, the MTTC passage rates for teaching candidates are typically less than 100 percent and differ among teacher preparation programs. The best available data for comparing the state’s teacher preparation programs on the MTTC exams are the specialty content area test scores, since at many colleges, students are not permitted to enter teacher preparation programs if they have not already passed the basic skills. Graphic 8, adapted from a 2006 report by State Superintendent of Public Instruction Michael P. Flanagan, shows a three-year aggregate of teaching candidates’ passage rates on MTTC specialty content exams. In comparing the schools, the MDE confers a “summary score” on each institution based upon the pass rate: 30 points for 90 percent or higher; 25 points for 85 percent to 89.9 percent; 20 points for 80 percent to 84.9 percent; and zero points for less than 80 percent.[79] These summary scores also appear in Graphic 8. 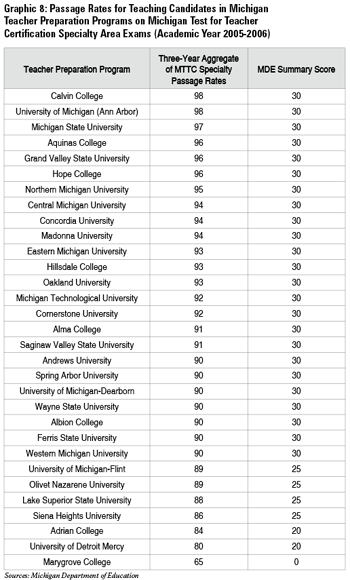 Unfortunately, teacher licensure tests may not actually be measuring knowledge that makes teachers effective. Stotsky reviewed three different Michigan licensure tests to determine whether they credibly evaluated understanding of reading pedagogy: the tests taken by general elementary school teachers, by building-level reading specialists and by elementary teachers with a specific endorsement in reading. Specifically, Stotsky sought to identify the presence of questions measuring phonemic awareness, phonics and vocabulary knowledge — "three of the basic components of beginning reading instruction … each of which is supported by a large, consistent, and credible body of research evidence."[80]

Her assessment is not encouraging. She found that critical reading instruction knowledge areas were tested by only 2 percent, 4 percent and 5 percent of the items on the Michigan licensure tests for general elementary school teachers, building-level reading specialists and elementary teachers with a specific endorsement in reading, respectively.

Stotsky also compared the content of NES tests, such as those used in Michigan, and ETS tests. Distinguishing between the two is important: NES tests are tailored specifically to a state’s requests and therefore reflect the wishes of state education officials, while ETS tests have standard content. Stotsky concluded that states using NES tests tended to focus more on important reading content knowledge than those using ETS tests, but she added: "[A]t least two NES states (Michigan and Illinois) have no higher expectations than those states using ETS’s elementary tests. A state gets what it asks for if it uses NES."[81]

Given that all teachers in the state must pass at least two tests, several questions arise as to whether teacher testing has a positive influence on work force quality. For example, do teachers who perform better on these tests perform better in the classroom? Would requiring higher cut scores on these exams help to create a better teaching corps? Alternatively, should we do away with teacher testing altogether? The existing research provides guidance on some of these questions.

In a study mentioned earlier (see Page 2), Clotfelter, Ladd and Vigdor of Duke University examined North Carolina data and explored questions regarding teacher performance on licensure tests.[82] They found: "Students assigned to teachers with higher licensure test scores apparently do better in math, but the effect is relatively modest. A one-standard deviation increase in teacher test score implies at most a 0.017 standard deviation increase in average student math test scores and a somewhat smaller increase in reading scores."[83] In other words, they found that students who have teachers who score at the 85th percentile on licensure tests tend to do slightly better in math and reading than students with teachers who score at the 50th percentile. These researchers attribute much of this difference to their finding that students with socioeconomic advantages tend to attend schools with higher-scoring teachers. This conclusion would suggest that the value of a higher-scoring teacher may be even smaller than Clotfelter and colleagues calculated.

In a recent study of teacher testing, Dan Goldhaber, whose other findings are reported above, explored many of the relevant questions about teacher testing with high-quality empirical analysis.[84] Goldhaber used a North Carolina data set that relates teachers to individual student test scores on standardized achievement tests. In 1997, the North Carolina set passage cut points on ETS Praxis exams, but in 2000, the state raised them. Goldhaber found that fourth- through sixth-grade teachers who would have passed even under the new cut scores were slightly more effective in promoting student achievement in math: Their students outperformed the students of teachers who would not have passed by 6 percent of a standard deviation.

Then Goldhaber studied the potential effect of even higher cut points to see how they would have affected the North Carolina teacher labor market. Goldhaber borrowed the cut point set by Connecticut, a state which uses a similar set of teacher tests. Interestingly, he discovered that using Connecticut’s higher cut point would have prevented many North Carolina teachers who were actually more effective than their higher-scoring peers from entering the classroom.

Thus, the research suggests that teachers who score better on licensure tests generally are more effective than those who score less well. Still, the gains from having a teacher who scores well are fairly small in math and even smaller in reading. Moreover, the fact that a teacher scores exceptionally well does not guarantee quality, and to the extent that teacher testing forms a barrier to entry for teachers who might turn out to be effective, testing is not a particularly helpful quality-control mechanism. There are also many practical difficulties (which Stotsky pointed out[86]) involved in raising cut scores appropriately, and the value of doing so is further limited to the extent that higher cut scores exacerbate teacher labor shortages in high-demand fields. At best, testing may be one basic signal of teacher competence, but policymakers should be careful when interpreting gradations in teacher test scores.

[*] Federal data actually show a few more people taking the exams than passing them, but the difference is negligible (much less than 1 percent; hence, the 100 percent pass rate after rounding). The reason for the discrepancy is unclear. (See “The Secretary’s Fifth Annual Report on Teacher Quality: A Highly Qualified Teacher in Every School Classroom.”)