The education research community has also considered whether teacher experience makes a difference in student achievement. This is an important issue, since existing teacher compensation policies usually reward teachers for staying on the job longer.

By state law, each district in Michigan negotiates its own salary schedule. Most districts have a "single salary schedule," meaning that one schedule determines the wages for all teachers in the district. This compensation policy has been in effect since the early 20th century, and it rewards teachers according to their level of degree and years of experience on the job.[27] In other words, under the single salary schedule, there is no differentiation in pay based on subject area, grade level, the difficult teaching conditions in a particular school within a district, or other teaching conditions. The single salary schedule was initially adopted to remove the possibility for unfair discrimination in teacher pay due to teacher characteristics unrelated to their effectiveness.[28] 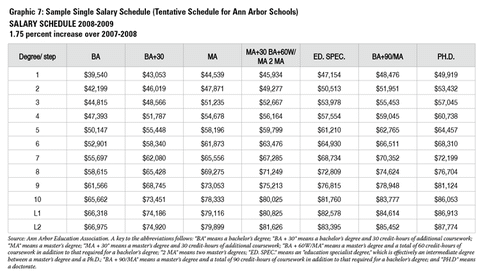 Given that credentials and experience form the basis for teacher compensation across the state, it is worthwhile to evaluate whether these characteristics are associated with greater effectiveness in the classroom.

In studies that disaggregate various teacher characteristics, teacher experience is shown to impact student achievement positively, but only over the first few years of a teacher’s career. By a teacher’s fourth or fifth year, his or her effectiveness tends to be set. Effective teachers remain relatively effective, and ineffective teachers remain relatively ineffective.

Several studies support this conclusion. In the study of Alabama public schools cited earlier (see "A Teacher’s Own Academic Ability"), Ferguson and Ladd determined that experience matters little after five years. They write, "[T]he teacher experience variable, teachers with five or more years of experience, apparently exerts no significant effect in either subject."[29]

Steven Rivkin, Eric Hanushek and John Kain include a similar finding in their study of teacher impacts on student achievement in Texas public schools during the 1990s. Rivkin, Hanushek and Kain write, "There appear to be important gains in teaching quality in the first year of experience and smaller gains over the next few career years. However, there is little evidence that improvements continue after the first three years."[30] These researchers also find that all beginning teachers — even those who will ultimately become quite effective — tend to be less effective than their more experienced counterparts.[31]

The only recent study that shows that veteran teachers with more than five years of experience become more effective in later stages of their careers is by Charles Clotfelter, Helen Ladd and Jacob Vigdor of Duke University. The primary purpose of their study was to examine whether students with socioeconomic advantages end up with better-qualified teachers.[32] Reviewing North Carolina achievement data for fifth-grade students, Clotfelter, Ladd and Vigdor presented findings indicating that highly experienced teachers were most successful at raising student achievement. All experienced teachers — even those with only one to two years of experience — were significantly more effective than novice teachers, but the "relationship between student achievement and teacher experience [was] nonlinear, with the peak occurring in those classrooms with teachers having between 13 and 26 years of experience; novice teachers (the omitted base category) [were] associated with the lowest test scores."[33] This same research team has also recently evaluated the impacts of teacher credentials on student achievement with high school students in North Carolina, and in this study, their findings were more consistent with the bulk of the research evidence concerning the role of teacher experience.[34] Clotfelter, Ladd and Vigdor again found that teachers with one to two years of experience were significantly more effective than novice teachers, but this time they are clear that highly experienced teachers, while also more effective than novice teachers, were not significantly more effective than those with one to two years.

Indeed, the weight of the evidence confirms Rivkin, Hanushek and Kain’s findings.[35] In a study published by the nonprofit Center for Analysis of Longitudinal Data in Education Research, Dan Goldhaber found, "Students with a teacher who has one to two years of experience outperform students with novice teachers by 3 [percent] to 7 percent of a standard deviation, and students with teachers who have three to five years of experience tend to outperform those with one to two years of experience by an additional 2 percent of a standard deviation."[36] These differences are not particularly large, but they are informative when paired with Goldhaber’s finding that there is "little evidence, however, of statistically significant productivity gains associated with increases in experience beyond five years."[37]

Jay Greene, chair of the Department of Education Reform at the University of Arkansas, suggests in his book "Education Myths" that teachers improve in the first few years because they get better at classroom management.[38] When teachers become more able to control groups of students, they can spend more time on instruction and less on discipline. In discussing the benefits of having experienced teachers, Greene also reports, "There is even some evidence that teachers get less effective in the later stages of their careers, perhaps because of the adverse incentives arising from the inability of most schools to fire veteran teachers even when their performance is very poor."[39]

The incentives created with teacher tenure and compensation policies are discussed later. For now, however, it is important to make clear that although experience may lead teachers to be more effective at certain points in their careers, each year of experience does not make a teacher commensurately more effective over the course of a career.