Charter network growing, but not likely in Michigan soon 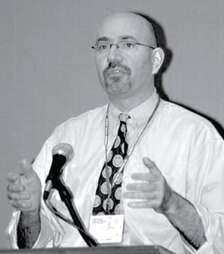 Michael Feinberg, cofounder of the Knowledge is Power Program, told audience members at a charter school conference in Detroit that the best way to hold schools accountable is through school choice. (Photos by Josh Nunez)

The first question Michael Feinberg fielded was not about requiring school on Saturday, not about his schools’ high test scores and not about his budget.

The first question Feinberg fielded after his presentation about the Knowledge is Power Program was when and if it is coming to Detroit.

His answer? Detroit is welcome to get in line, just like everybody else.

A KIPP cofounder, Feinberg said that demand for KIPP schools has grown so much in the past 10 years that rather than scout the country for potential school sites, the program now requires applicants to come to it. With 57 schools in 17 states, two more scheduled to open this year and a growing list of philanthropic supporters, KIPP is becoming selective about its future.

In an address at the 10th annual Michigan Charter Schools Conference sponsored by the Michigan Association of Public School Academies in November 2007, Feinberg explained the KIPP model and how the foundation plans to "tip" public education.

High math scores in Houston and New York, the first KIPP sites, brought the model national attention. The day after a "60 Minutes" program about KIPP was broadcast in 1999, Feinberg received a telephone call from a California school administrator who said, "We want to order 15 KIPPs for next year, please."

Shortly after, Feinberg and cofounder Dave Levin partnered with the founders of Gap Inc., to establish the KIPP Foundation. Today the foundation works with groups to establish KIPP schools, and it also trains school leaders and teachers.

KIPP’s goal, Feinberg told the an audience in Cobo Hall, is to move into cities where detractors say the political, social and economic obstacles are too much for school systems to overcome and then to overcome those obstacles.

"We know we aren’t capable of KIPP-atizing all 50 million children in public education today. But we think we can contribute," Feinberg said. "Wherever people are making … excuses, we want to start schools there under the same conditions, to prove what can and should be happening across the board."

The typical KIPP schedule requires students and teachers to be in school from 7:30 a.m. to 5 p.m. weekdays. Students spend two to three hours on homework nightly and attend school on alternate Saturday mornings as well at least four weeks each summer.

It’s not difficult to find teachers willing to put in those hours, Feinberg said, because the best teachers already are. For the extra time, KIPP pays teachers 15 to 20 percent more then the average surrounding districts.

"Every single school here in Detroit — and I don’t care how bad the school is — has at least got a handful of great teachers. There are a few cars in that parking lot at 7 in the morning and a few cars … at 5 in the afternoon. At KIPP, all the cars are there at 7 … and at 5."

KIPP won’t open a school in a community without favorable charter school laws, Feinberg said, because parental choice is the surest way to improve a school.

"The most important accountability measure, beyond any test score … is the pitter patter of the kids’ feet," he said. "If they choose to come to our school, what are we doing to view the kid and the parent as our customers?"

It’s tough to find the balance between academic rigor and customer satisfaction, he acknowledged.

"We’ve got to push in a way that we aren’t pushing so hard that we’re pushing them out the door."

Some critics have said KIPP is doing just that, pointing to high attrition rates at some KIPP schools. If the students who leave KIPP are low achievers, then the program is not serving who it claims to serve, they said. Rather, it is serving motivated low-income students who already are higher achievers.

Other education researchers say that attrition is common among urban minority populations in any school because those populations are more transient in general. They also point out that KIPP’s highest attrition numbers are found, not unexpectedly, during the first year in new KIPP schools and that the attrition rate decreases over time. KIPP is now doing its own national analysis of attrition.

Too many school principals today are not school leaders; they are babysitters, Feinberg said.

"They’re told who will teach in their building. They cannot get rid of people. … They don’t have any real control over their budget dollars," he said. "No wonder they’re frustrated."

Every KIPP school is led by a director who has completed a year of KIPP training. That person has the freedom to hire and fire staff and make budget decisions, and then is held accountable for results, Feinberg said. In the few cases when a KIPP school has failed, it was because the wrong person was chosen as leader, he said.

In return, KIPP teachers and leaders are expected to bring underperforming students up to and beyond grade level within two years. Every KIPP student is expected to attend college.

Overall, Feinberg said, KIPP has made its mark on education, but "we haven’t really tipped anything."

The charter school movement overall has not "tipped" education either, Feinberg said, in part because of quality control.

"The fact is that several of our brothers and sisters in the school movement have not started very good schools, and they’ve not been held accountable," he said. "It can’t just be about growth. It’s got to be about quality."

KIPP itself has revoked permission to use its name in five schools. Of those, three are now operating under other names and two have closed.

Asked about bringing KIPP to Detroit, Feinberg said that any group can file an application for a KIPP license, but they have to meet three core requirements — funding, facilities and freedom.

KIPP schools typically do not take in enough local and state revenue to cover the cost of running the school. One reason is that charter public schools typically receive less per-pupil funding than conventional public schools. Another is that KIPP has added costs due to the extended school day and school year. To make up the difference, which KIPP estimates at roughly $1,000 to $1,500 per student, KIPP schools must develop a fundraising plan and seek out additional revenue through public grants and private donations.

Even with the additional fundraising, however, KIPP spends less per student, on average, than most urban districts, according to the foundation.

Regarding facilities, Feinberg said they don’t have to be fancy, but zoning and other regulatory questions have to be resolved in advance. "Freedom" means there is a legal way — preferably a "healthy charter law" — for the school to open.

In Michigan, getting a charter would probably be the biggest obstacle for a group interested in opening a KIPP school, said Dan Quisenberry, president of the Michigan Association of Public School Academies. Michigan law caps the number of charter schools that can be authorized at state universities to 150. As of mid-December, he wasn’t aware of any organization planning to apply.

The KIPP Foundation confirmed that is has not received an application from Michigan to date, but said that it has been approached for information by a number of business and education leaders here. In any case, the earliest the foundation will accept new applications is this spring, for schools that would open in 2010.