Michigan Education Association members paid about $66.6 million in dues and fees to the union in 2006-2007, a 5 percent increase over the previous year even as the number of active teacher memberships decreased. Total income and spending by the MEA, the state’s largest employee union, also increased.

In filings with the U.S. Department of Labor, the MEA reported total membership of 157,181, about 200 more than the previous year. The number of student and retired members grew, but active educator memberships declined by about 1,500, while support personnel membership remained essentially unchanged. The number of fee payers — individuals who choose not to join the union but pay a fee for its services — rose from 685 to 734.

MEA dues are calculated as a percentage of a teacher’s salary, to a maximum of $620 per year. That does not include dues paid to the National Education Association.

The MEA reported spending $31.5 million last year on employee compensation, up 8 percent from the previous year. The average MEA employee earned about $81,000, although the actual figures ranged from a high of approximately $204,000, the gross salary recorded for Arthur Przybylowicz, general counsel, to $8,500 paid to a bargainer. Executive director Luigi Battaglieri’s gross salary was reported as $195,000. The average Uniserv director salary was about $100,000.

In comparison, the average Michigan teacher earns $58,482, according to salary tables at the National Education Association Web site. The gap between the average teacher salary and average union employee salary widened by about $1,000 since Michigan Education Report reported on union filings in 2006. About 40 percent of MEA employees earned $100,000 or more in 2006-2007.

The MEA did not respond to a request for comment on the report.

"If their wages are going up faster than the industry they’re working for, there’s a problem," he said. "They should be reflective."

Uniserv directors work with local teacher unions on a variety of issues, among them organizing, bargaining and grievance procedures. As for other MEA staff members, such as clerical employees, Eppelheimer said their wages should be comparable to those found in local public school systems.

"I do believe many MEA salaries are out of line with rank-and-file MEA members, and are increasing at a much greater rate than the typical teacher," said Judith Meier, a junior high school teacher in Vassar Public Schools.

In addition to employees, the MEA also spent about $809,000 on officers and board members, of which $540,000 was for salaries and the remainder was for other reimbursements. That amount was down about $100,000 from a year ago. 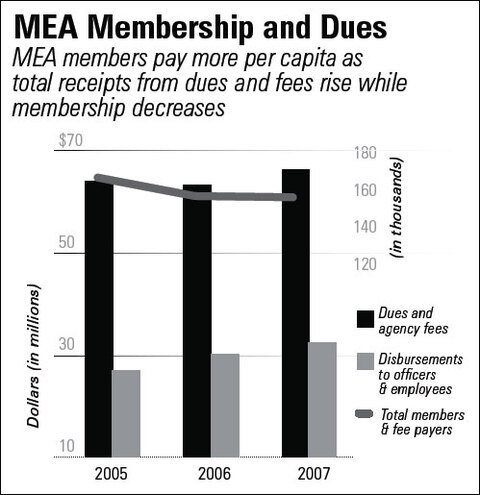 With the exception of the top three positions, most MEA board members receive $1,000 or less, much of it labeled as disbursements for official business.

A University of Michigan labor researcher was not surprised that compensation for union officials and employees rose more than the average teacher salary despite Michigan’s tough economy.

"In Michigan and elsewhere, we’re seeing a ratcheting down of wages and benefits in the private sector," which leads to similar downward stress in public sector services, said Roland Zullo, an assistant research scientist in the university’s Institute of Labor and Industrial Relations.

That situation creates more work for union negotiators, not less, he said. If there is less money available, opposing groups take longer to come to terms on how to spend it, he said, suggesting that administrative salaries have not been reduced either, for the same reason.

"In a difficult climate, it sometimes makes it (negotiations) more costly," he said. "When times are good, it’s easier to negotiate a settlement, for all the parties."

Dues and fees accounted for about half of the MEA’s total income of $131.8 million during the period covered. Other revenue came from a wide variety of sources, including about $5.3 million from the National Education Association and $4.7 million from the Michigan Education Special Services Association. MESSA is a third-party insurance administrator established by and affiliated with the MEA. It pays the union for marketing and shared service fees, according to the filing. About $32 million in receipts is listed as "all other," with no source named.

The MEA’s total spending topped $124 million, up 5 percent over the previous year. Of that, $16 million was spent on representational activities, according to the report. The union spent $56 million on general overhead, $20 million on benefits and $6 million on union administration.

On the spending side, the report shows that the percentage of hours that MEA employees spent on "representational activities" decreased 4 percent from 2006 to 2007. On average, union members spend 41 percent of their time representing members, the report said.

The American Federation of Teachers Michigan also filed its annual report with the Department of Labor, reporting that its president, David Hecker, received a salary of approximately $128,000. Lois Doniver, secretary/treasurer, received approximately $97,000. With allowances and disbursements for official business, the total spent on the two officers was $292,000.

AFT members paid about $2 million in dues and fees to the union in 2006/2007, down nearly a third from $3 million the previous year. Total income of $3.2 million was down 16 percent from a year ago, and total spending was down 22 percent.

The AFT Michigan represents about 25,000 employees in 94 locals across Michigan, according to its Web site.

Membership was up by nearly 1,000 in 2007 compared to a year ago, but a larger share of members are now in half-time or quarter-time positions. The number of full-time working members of the AFT shrank by about 300. The number of AFT fee payers grew by 400 and now represents 5 percent of the organization.

The AFT reported having 40 employees. Jeanette Harris, comptroller, Jon Curtiss, organizer and Julie Matuzik, political organizer, each received the top gross salary of $104,353. The average salary was about $50,000, but that includes five people making less than $10,000 and three making less than $500 for the year. When those eight are excluded, the average salary equals about $66,000.

In addition to requiring labor unions to file financial reports, the Department of Labor requires separate filings called "Officer and Employer Reports" from union officers, employees and businesses or other organizations that do business with unions or their officials.

The separate filings show that, in addition to their income from the Michigan Education Association, several officers and employees of the union have received income or gifts in recent years from sources that do business with the union.

Salters is a member of the Blue Cross Blue Shield of Michigan board of directors, which reported expenditures or payments of about $33,000 to her in 2006. That included $31,000 in board fees and smaller amounts for assorted receptions, as well as $1,200 for Super Bowl tickets. A number of large and small labor organizations are represented on the BCBSM board, which sells insurance products directly to school districts and indirectly through the MESSA, an MEA-affiliated insurance administrator. Salters also reported receiving about $1,800 in gifts, meals and football tickets directly from MESSA as a member of its board.

Salters also sits on the board of directors of The Accident Fund Insurance Co., headquartered in Lansing. The company reported paying her about $16,000 in board fees and for the cost of board receptions in 2006.

Battaglieri, the MEA executive director, reported that he received $28,688 as a board member of Delta Dental Plan of Michigan in 2006 in the form of a monthly retainer, meetings stipend and for meals and lodging associated with meetings. Delta underwrites part of the MESSA insurance plan. He also reported receiving about $1,800 in football tickets, gifts, hotel rooms and meals directly from MESSA. Battaglieri is MESSA’s executive secretary.

Przybylowicz, MEA general counsel, reported that his wife, Suzanne K. Clark, received about $96,000 from the MEA in 2006 through her law practice. Clark is affiliated with Lee & Associates, PLLC, a Southfield law firm that did $512,000 of work with the MEA that year. Przbylowicz’s own salary from the MEA was reported as $204,000.

A copy of the labor filings from the U.S. Department of Labor is available at https://www.mackinac.org/archives/2008/MEA-LM-2-2007.pdf.