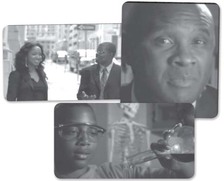 Both Detroit Public Schools and the Michigan Association for Public School Academies use television advertising to promote their programs. One DPS campaign features student chefs, dancers and mechanics, as well as the student shown here in a science program. More recent DPS ads show district graduate Michael Roberts, above left, now a financial planner. MAPSA television spots include former Detroit Lions wide receiver Freddie Scott, above right, who says, “As parents in Michigan, we all have a right to choose.”

Michael Barlow has been told by the professionals that he has a knack for writing radio spots. Like the one that begins "Parents: Discover one of the best-kept secrets in Oakland County. It has lots of new, affordable housing and it’s in a jewel of a district called the Hazel Park Schools."

Radio ads like that one, plus Hazel Park Schools’ direct mailings, newspaper advertisements, flyers and brochures, may be among the reasons the district has brought in more students through schools of choice than it has lost, although it’s difficult to assess, Barlow said. 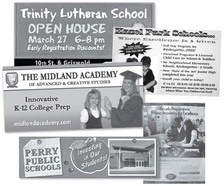 School districts across the state, and nationwide, are using conventional means of advertising to help spread the word and attract students to their services.

But even though Barlow believes the advertising gets results, he doesn’t particularly like having to do it. Schools-of-choice agreements and competition from charter and independent schools have forced Hazel Park and other districts into advertising campaigns, he said. Barlow would prefer to spend that time in his main role as director of curriculum for the school district.

"It has caused districts to devote a portion of their revenue to competing with each other," Barlow said. "I’m in favor of competition … but schools might be better suited to be focusing on improving academic achievement."

Other administrators in competitive areas like southeast Michigan also have turned to advertising as a way to attract students — and the state aid that follows.

"We’re not a monopoly any more. Competition is intense," said Lekan Oguntoyinbo, spokesman for Detroit Public Schools. "There are all kinds of options out there now. To keep our customer base, we have to be out there delivering our message unfiltered."

"Customer base," "market share" and "zone advertising" are not familiar — or comfortable —terms to many school officials, an advertising consultant told Michigan Education Report.

"You’re selling education, and that’s difficult for educators to deal with. It’s not how they’re trained to think," said Robert Kolt, president and CEO of Kolt Communications, an Okemos-based company that has worked on occasion with school districts. Kolt also teaches advertising at Michigan State University. "Colleges have always marketed themselves, but to K-12 it seems uncomfortable."

Radio, television and newspaper ads, plus fliers and brochures, are some of the tools schools are using to promote themselves. Highland Park Schools went a step further in the summer of 2006 when it sponsored a "mobile enrollment" campaign by sending a motor coach sporting a school banner to various parks and playgrounds throughout the Detroit area, offering enrollment information. Earlier this year, the district paid for billboard space one block outside its own boundaries, inside the Detroit Public Schools district.

"It’s an investment. We regard it as that," school spokesman Greg Byndrian said of the district’s $93,000 marketing budget. "You don’t have to attract very many students to recoup that."

Since school districts receive about $7,000 per student in state aid, attracting a dozen students would pay for the advertising in Highland Park. The Hazel Park School District’s annual marketing budget is about $48,000, according to Barlow, while Detroit Public Schools allocates $500,000 a year, Oguntoyinbo said.

The customer service money was spent on training staff in customer service skills, since the front office workers in any given school are often the ones who make the largest impression on parents, he said.

Kolt said that advertising should be viewed as just one tool in a larger public relations effort.

"Sometimes the most important thing is not to invest in advertising, but just to communicate with parents."

One of the effects of spending money on public relations is that it forces schools to "disclose and defend what they do," Kolt said. "Nothing sells itself, and educational institutions realize they need to promote their own programs."

Promote is the key word. Most school districts say they limit their advertisements to pointing out their own strengths, not other schools’ weaknesses. Portage Public Schools, for example, has more than doubled the amount it spends on "image" advertising in local Chamber of Commerce and realty publications.

The increase, from $1,000 to $2,450, is in response to the Kalamazoo Promise, offered in neighboring Kalamazoo Public Schools, according to Tom Vance, community relations manager for the Portage school district. Funded by anonymous donors, the Promise offers free college tuition to Kalamazoo Public Schools graduates who meet certain criteria. The Portage district supports the Promise as a way of strengthening the community overall, Vance told Michigan Education Report, but at least 50 students have shifted from Portage to Kalamazoo to take advantage of the offer. Most of those students already lived in the Kalamazoo district, but were attending Portage schools, according to Vance.

Portage also buys a weekly full-page advertisement in the Portage Gazette during the school year, which it uses to promote news and feature stories about the district. The cost is $21,000 annually, down from $40,000 a few years ago when the district purchased the space year-round.

"Overall our communications spending has gone down over the past few years, although we’ve adjusted some methods and targeting," Vance wrote in an E-mail to MER. "Our main strategy for maintaining and recruiting students is to tell our story of academic excellence, since we’re in the top 6 percent of high-achieving districts in Michigan."

In Hazel Park, Barlow said he focuses the advertising on things like the district’s free all-day kindergarten, free athletic programs and being a "hometown, caring district." He also has made appeals to the area’s ethnic communities by putting up posters written in Chinese, Arabic, Spanish and Korean in area restaurants and churches. To the south, Highland Park capitalizes on its Career Academy, which offers a wide variety of career and technical programs.

"That’s certainly been a very big draw for us," Byndrian said. Enrollment figures show that nearly 1,600 students who are assigned to the Detroit Public Schools district attend schools in Highland Park. "We don’t engage in bashing others," he said. "We stress the positive."

Media buys are not for every school, however. Dr. Stephen Evans, superintendent at the Pontiac Academy for Excellence, a charter public school, says that he believes radio and television advertising would be "a big waste of time." But his school does send fliers and brochures to households within a five-mile radius, prints promotional posters in English and Spanish, and asks every vendor that visits the school to walk away with literature to distribute. Evans also personally visits local Head Start programs to tell them about the charter school. Still, "I think the biggest thing that has brought students here is the quality program."

The Academy is located in the lowest socioeconomic neighborhood in the city. Community resources are limited, he said, so he focuses on "the kind of program that would facilitate inner-city needs," like before- and after-school activities and a Reading Recovery program. Parents are invited to become involved in technology classes.

"Word of mouth has been the biggest thing," Evans said. The Academy’s enrollment has grown from an initial 25 students in the year 2000 to 1,150 this year. According to the National Alliance for Public Charter Schools, Pontiac ranks fourth in the country for market share captured by charter schools. While about 5 percent of Michigan students overall attend charter schools, in the Pontiac area the number is 20 percent, based on 2005-2006 enrollment.

Farther north in Michigan, the manager of one outdoor advertising firm says he has not seen an increase in K-12 school advertising on billboards.

"We’ve had it for years around here," said Doug Elchuk, vice president and general manager of the Saginaw office of Lamar Advertising. His office serves 23 counties in the middle of the state. Some school districts in his region do buy billboard space, typically to congratulate students for achievements in sports or extracurricular activities, he said. Lamar itself donates free space to school districts at times as a public service.

"School districts are like anybody else," he said. "If they can do things that make them look good, they will."

Rather than putting advertisements in front of them, parents would be better served if all schools — private, public and charter — focused on providing quality programs and on making it easier for parents to obtain information and compare schools, said Dan Quisenberry, executive director of the Michigan Association of Public School Academies.

"We as a society need to get better information to parents," he said. "What we have found is that parents want a quality school. They want to know what you are doing and how."

To that end, MAPSA and the charter school community developed a Web site where parents can look up information about charter, private, parochial and conventional public schools, at www.school4me.org. "If parents are well -informed and know how to pick schools, our (charter) schools will do just fine."

Quisenberry also says that not all districts take the positive-only approach to advertising. Detroit Public Schools sponsored radio and television ads in recent years centered on the theme "Come Home to Detroit Public Schools," which, he said, made misleading claims that charter schools do not serve special education students and do not hire certified teachers.

"Charter schools make a lot of promises, but they don’t deliver. Many of their teachers aren’t certified," one television ad said. Developed in 2005-2006, the ad can still be viewed at the Detroit Public Schools Web site. Despite that ad and others, Quisenberry pointed out, DPS enrollment continues to decline while charter enrollment in Wayne County has increased.

"Bashing everybody else is not going to work," he said. "The first step is to put together a good program. Parents, by word of mouth, will find out about it."

The most recent DPS television advertisements do not remark on charter schools. Most feature graduate Michael Roberts, a financial planner who says, "Detroit Public Schools prepared me for everything. Come home to Detroit Public Schools." Radio spots encourage students to stay in school and graduate.

Asked about the change in focus, Oguntoyinbo said, "I don’t know that there was a specific reason. We decided that perhaps it was more important to advertise certain things." The district is trying to sell parents on the wide variety of academic and career programs that Detroit offers, he said, like programs in culinary arts, robotics and aerospace.

When he gets complaints about the money spent on marketing, Oguntoyinbo said he responds, "Look. Everyone’s advertising. Inkster. Highland Park. Oak Park has a lot of our kids. We don’t have the luxury to sit on our hands."

In Hazel Park, Barlow agreed. "We are a cash-strapped district. … Our finances are tied directly to the number of students we have. We would be derelict if we didn’t get in there and compete."