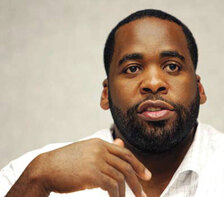 Charter superintendent:
'He crossed a Rubicon there. That was a big step.'

If the seven-year history of University Preparatory Academy in Detroit has proven anything, it is that high dropout rates and low college enrollment are not inevitable in large urban public school systems, the school's top administrator said. But even as the academy, a charter school, prepares for its first graduation ceremony, Superintendent Doug Ross said the work in Detroit has just begun.

"What we still have a long way to go on is fully closing the achievement gap," Ross told Michigan Education Report. He added later, "Until we're able to graduate kids who are academically competitive with kids coming out of Birmingham, we are still not a success. That is our next goal."

Toward that goal, Ross currently has the support of Detroit Mayor Kwame Kilpatrick. In a visit to University Prep's ninth-grade class in March, Kilpatrick helped kick off a campaign called "Detroit's Great Hope." According to media reports, Kilpatrick told the students that there is more to education in Detroit than Detroit Public Schools. He told reporters that he wanted to add more charter and private schools to the education mix in the city, saying Detroit needs to view the education of its children in total. Kilpatrick also said that he had been meeting privately with charter and private school leaders, including Ross, for ideas on model schools.

"He crossed a Rubicon there," Ross said of the mayor's statements to the ninth-graders. "That was a big step."

It also was a change in direction for the mayor, who in 2003 withdrew his support for an offer of $200 million to build 15 new charter high schools in Detroit. Kilpatrick had originally supported the offer from philanthropist Bob Thompson, but changed course in the face of stiff opposition from the Detroit Federation of Teachers. Since then, however, enrollment figures show that thousands of students who are assigned to Detroit Public Schools choose instead to attend private, charter or conventional public schools in neighboring districts, taking with them millions of dollars in state funding. The Detroit Board of Education voted this spring to close 34 elementary schools next year and more in the following year if the schools do not meet academic or enrollment goals.

While Kilpatrick's comments are "a step in the right direction for parents and students of Detroit," the state's universities won't be able to respond unless the current cap on charter schools is lifted, pointed out Ed Richardson, director of the charter school office at Grand Valley State University. Michigan law limits the number of charter schools that public state universities can authorize to 150 combined, although the state also passed a law in 2003 providing for 15 new charter high schools in Detroit to accommodate Thompson's offer.

Demand is heavy for university authorizations, according to Richardson and James Goenner, executive director of Central Michigan University's Center for Charter Schools.

Two GVSU-authorized schools are closing, and more than 20 organizations have applied for those charters, Richardson told Michigan Education Report.

"We have roughly 50 groups that are interested in starting charter schools, but most of them are waiting on the sidelines because when there are no charters available, you really have to look yourself in the face and wonder why go through the effort," Goenner told the Detroit News earlier this year.

In a pledge they took during Kilpatrick's visit, the University Prep ninth-graders said they would become involved in changing the future of Detroit by graduating from high school and going to college or pursuing other postsecondary studies. They also have invited other ninth-graders in Detroit Public Schools and charter public schools throughout the city to join the challenge.

University Prep operates under the terms of a "90/90" requirement set by Thompson, a Plymouth resident who, with his wife, Ellen, donated $15 million for the campus near downtown Detroit. He leases the buildings to University Prep for $1 a year. In exchange for his financial support, the school must have a graduation rate of 90 percent and at least 90 percent of each graduating class must attend college.

"My guess is we'll end up somewhere between a 93- and 95-percent graduation rate," Ross said. Each student in the school's first graduating class already has been accepted at a college or technical school, but they must follow through and actually attend classes to fulfill the second half of the 90/90 requirement, he said. A third requirement ' that the class have a median score of 18 on the ACT test ' has been met.

"If you're going to keep 90 percent of your kids in school, you need to deal with issues of identity and aspirations," he said. Many students "decide too young that they aren't winners at the school game." He said large urban school systems like Detroit have a strategy for teaching academics, but "no strategy for building identity. ' The issue is that the mass production system used by traditional public schools is obsolete."

Ross said he favors small high schools where teachers and administrators can get to know students personally. At University Prep, students are assigned to an "advisory," or learning community, in groups of about 16, staying with that group and the same adult adviser for two to four years. According to a report in the Detroit News, Ross and others recommended the mayor create 50 such schools in the city, if not through Detroit Public Schools then by other measures.

A second University Prep system, also chartered by Grand Valley State University and with financial backing by Thompson, is scheduled to begin operations in the fall of 2008. University Preparatory Science and Math Academy will open with a middle school only, just as University Prep did with 112 sixth-graders in 2000, later adding a high school and then, potentially, elementary schools, Ross said. Richardson said the school will be the first opened under the 2003 law providing for new urban high schools in Detroit.

The MEA is a longtime critic of charter schools and has advocated heavy regulation of charter operations and caps on the number of schools. Most recently, the union lost a court battle over Bay Mills Community College, an American Indian tribal college in the Upper Peninsula that charters more than 30 schools. The MEA had argued that, because the Bay Mills board of governors is not publicly elected, but appointed by tribal members, the schools it charters are not public and are therefore ineligible to receive public funds. The Michigan Court of Appeals dismissed the suit.

Ross said he met Trimer-Hartley through her work with "Your Child: The Coalition," which describes itself as a nonprofit coalition of Michigan-based education and family organizations that studies education issues.

The scene in Detroit is an example of demand for quality driving growth, said Stephanie Van Koevering, executive director of the Michigan Council of Charter School Authorizers. The council is an organization of 11 of the 26 entities that authorize charter public schools in Michigan, and collectively represent 90 percent of the student population in charter schools.

"As people learn more about charters and how they're overseen, they tend to be more supportive," Van Koevering said. Parent demand may be the force that ultimately lifts the cap on the number of charter schools that Michigan public universities can authorize, she said.

"The fact that there is a cap doesn't leave room for low performers," Van Koevering said. Some 20 charter schools have closed in the past 20 years and a handful more closures are expected. Lakeshore Public Academy near Muskegon, for example, will close at the end of this year due to low test scores and declining enrollment. The MCCSA doesn't see that as a weakness, but a strength.

"That's accountability in action," Van Koevering said. "That's not something you see happening in the conventional K-12 community."

In addition to focusing on quality control at its members' schools, the MCCSA also is building a body of research about what works well in charter schools and making those techniques known to the education community. One of the original policy goals behind charter schools was to bring innovation to Michigan education, she said.

"That's what the charter system has accomplished. Only through competition can we improve."