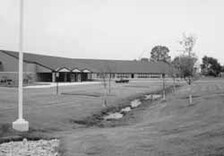 All Saints Catholic School is the first new school to be built in the Detroit Archdiocese in more than three decades. Surging student demand caused enrollment to double after just one year of operation.

The Catholic Archdiocese of Detroit has begun a $60-million building campaign to expand and renovate over a dozen of its schools-the largest expansion program of its kind in 30 years, according to the Detroit Free Press.

Student enrollment in the six-county, 172-school archdiocese has risen since 1990 after a thirty-year decline, and individual schools are struggling to keep up with the growing demand.

In just four years, the Notre Dame Preparatory High School in Pontiac and its middle school, the Marist Academy, have experienced a nearly 500-percent increase in student enrollment, up from 183 students in 1994 to over 900 for the 1998-99 school year.

To accommodate this growth, the two schools are building new classrooms, lab facilities, art studios, and a multi-media library and expect their facilities to handle 1,200 students by the start of the next academic year in 1999.

Parental desire to send their children to Notre Dame and Marist is motivated by the schools' educational success rates, according to Lynn Mehl, director of development for the schools. "Fully 100 percent of our graduating classes from the past two years have gone on to college," she said.

All Saints Catholic School in Canton, the first new Catholic school to be built in the Detroit archdiocese in over 32 years, has experienced similar growth, with enrollment this fall standing at more than double that of 1997, its first year.

Principal Mary Rita Allen said the elementary school's kindergarten classes are already full through the year 2000, and she estimates continued growth to exceed 500 percent over the next five years. Parents are already signing up their newborn children for kindergarten for the 2003-04 school year, she said.

Allen said the creation and success of All Saints is due to the efforts of the parents who have provided "unconditional devotion" to the establishment of a Catholic school in their community. "Without their dedication, the school would not have experienced the success and growth it has in one year of operation," she said.

Funding for the Catholic building boom comes from parents and relatives of students, and Catholic parishioners. Notre Dame and Marist secured a $3.5 million loan from the archdiocese for their projects. The initial $750,000 of the $7.2 million needed for the construction of All Saints was raised by three area parishes. A fourth parish donated the land the school occupies. The Detroit archdiocese loaned All Saints the balance of the funding.