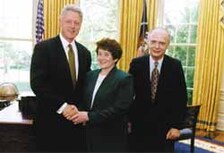 President Bill Clinton congratulates Michigan Teacher of the Year Kathie Grzesiak in the Oval Office with Secretary of Education Richard Riley. Grzesiak, who teaches fifth grade in Midland’s public school system, was in Washington, D. C. to be honored at the 1998 National Teacher of the Year recognition ceremony.

Kathie Grzesiak knows about teaching children. But the 1997-98 Michigan Teacher of the Year, who was recently awarded $25,000 for her teaching talents, places credit where she believes credit is due: on teamwork between her school and the parents of her students.

Grzesiak-better known as "Mrs. G" to her fifth-grade students at public Eastlawn Elementary School in Midland-is a 28-year teaching veteran with a quarter-century in public schools who has definite ideas about what works in education. "I believe that parental support and involvement are the keys to success," she said.

Grzesiak was one of only four Michigan educators to win the $25,000 Milken National Educator Award for advancing excellence in education. The award was sponsored by the Milken Family Foundation in Santa Monica, California, and the Michigan Department of Education.

She is modest about her awards, according to her husband, Bill. "She's very talented and she loves to work," he told the Midland Daily News. "She believes in doing her best and getting the best out of her students."

And getting the best out of students involves more than just hard work on the teacher's part, she said. "Education has to be a team approach between the parents, teachers, and children," she said. "If you don't have [parental involvement], you are fighting a losing battle. If what you do in the classroom is not supported at home, nothing will work."

Michigan parents seem to agree. Polls show an increasing dissatisfaction with the public school system among parents and a desire for more educational options. However, surveyed parents typically rate the school their child attends higher than the public system at large.

Grzesiak believes alternatives including charter, private, and religious schools should be available. "Parents have the right to find the best educational opportunity for their children," said Grzesiak.

"Charter schools are another alternative for parents who don't believe the local public school is meeting the needs of their children. If [charter schools] provide an option for children to be the best they can be, then I support those alternatives," Grzesiak said.

But she remains optimistic about Michigan public schools in general. "I would grade the public system somewhere in the 'B' range," said Grzesiak. "We are not exactly where we want to be-I don't think you ever are. Once you reach the top of the mountain you wanted to climb, you see another peak beyond it-that is the 'A.'"

Grzesiak was named Michigan Teacher of the Year in 1997 and flew to Washington, D.C. in April to meet with the President. She was also among the top teachers chosen to participate in the U. S. Space and Rocket Center's International Space Camp in July.

Such workshops in mathematics and science help her prepare for another year of teaching. "That's what really keeps me from getting burned out. I am energized by continually learning myself and by being around other teachers," she said.