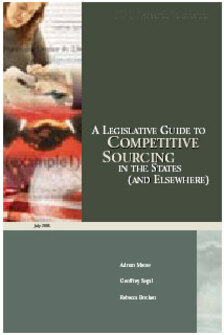 In September, The National Federation of Independent Business and the Reason Foundation, an institute that produces globally recognized privatization research, released a 32-page study titled "A Legislative Guide to Competitive Sourcing in the States (and Elsewhere)." The guide was written by the Reason Foundation’s Adrian Moore, Geoffrey Segal and Rebecca Bricken, and it is designed to help policymakers privatize in the most effective way possible — that is, by doing it right the first time.

The guide notes that with recent increases in competitive contracting, states may need to update the guidelines and policies in their contracting rules.

Privatization has been on the rise. According to the guide, "the value of all federal, state and local government contracts with private firms — including service outsourcing agreements — is up 65 percent since 1996, reaching a total of over $400 billion in 2001." Other studies suggest that contracting has been driven in recent years by state budget troubles. A nationwide survey by the Council of State Governments, for instance, found in 2003 that among the state budget officers and legislative directors who responded, 68.4 percent said a primary reason for privatization initiatives in their state was to save money. The Mackinac Center for Public Policy surveyed every school district in Michigan in 2005, after several years of slow growth in state education budgets, and found that the number of districts that privatized busing, food or janitorial services had increased from 31 percent to 35.5 percent since 2001.

The guide notes that with recent increases in competitive contracting, states may need to update the guidelines and policies in their contracting rules. The report is therefore designed to share "best practices," thus "ensuring transparency, accountability, and the delivery of high performance."

One reason Southwest Airlines flies only one type of aircraft is so that its mechanics need to learn only one system. The same savings can be obtained by having state agencies use similar privatization processes whenever possible.

This report belongs in the reference library of policymakers who want to explore privatization. It is not the first and last word on privatization, but as a quick guide on best practices, it was not designed to be. Policymakers should use it to design privatization strategies that benefit from the experiences of others. 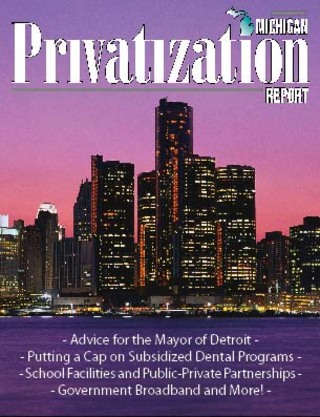